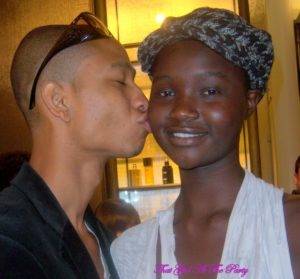 I felt like Cinderella on the Anna Wintour/NYC & Company/CFDA/Mayor Bloomberg created Fashion Night Out! I actually had a chariot in the form of a massive party bus complete with a stripper pole supplied by A Bus Party.com as transport for the magical evening!  Mario, the owner subbed as the handsome prince for me and four other gals and his driver (oddly also a “Mario”) spirited us from Mad Ave to the Meatpacking District.  With so many spots to hit, I decided to separate the stores by region.  Met Arthur Elgort at Dior and dropped briefly by Montblanc.  The Madison Avenue shops were somewhat reserved so we headed to the Meatpacking District where Tory Burch threw the best party of the night.  With food from La Esquina and our favorite DJ Cassidy spinning, partygoers/shoppers tore the roof off!  From Tory’s bash, we headed off to Soho and true to the downtown spirit, it completely rocked!  Oddly, the folks at Chanel were telling people not to take pictures which was just plain silly!   I mean really, the clothes are already on the rack so it is not like someone could steal the design.  Surely, the fashion counterfeiters are more sophisticated than that and most likely have insiders steal designs BEFORE they even hit the runway!  The worst fete of the night was the Rachel Rachel Roy Pop-Up store where the PR company tried to revive the seventies and had a ridiculous red velvet rope vibe whereby shoppers had to wait outside!  I love Rachel Roy and she is always a sweetheart but this was ill-conceived.  There were simply too many places to hit to have any kind of waiting going on.  The one bright spot of Rachel’s party was that I got to say ‘hey” to my girl Estelle, although even she was imprisoned behind a rope for the night. (This was totally out of character for her as she is usually simply mingling with the crowd at events!) In fact, next year they should do away with the whole elitist rsvp/list thing.  It is just not in the spirit of the evening and it took me days to rsvp and confirm my attendance to things and I had to separate from those in my party that were not confirmed.  It should just be a shopping evening for EVERYONE.

They should also extend the event and make it Fashion WEEK Out, and run it for the entire Fashion Week.   It was impossible to do more than about 6 of the 800 participating stores in the allotted one evening!  I would also do a map of the FNO stores, so that shoppers can more easily navigate the evening.  And since this is every shopaholic fashionista’s ultimate fantasy night, next year, I hope I will be able to have a Black American Express card in order to more fully exploit the evening!

Opening of the "Flatiron Gallery" at Restoration Hardware