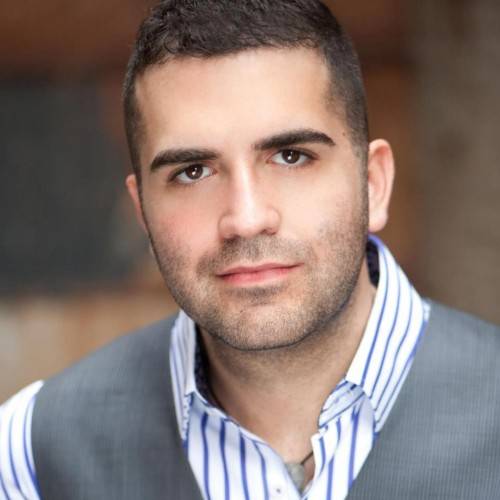 Stars were dressed to dazzle at the 64th Annual Primetime Emmy Awards on Sunday, September 23, 2012.  Though the best dressed may have had stylists to assist them in choosing their gorgeous gowns, TGATP’s favorite celebrity psychic Thomas John interprets the deeper meaning behind their dress choices. 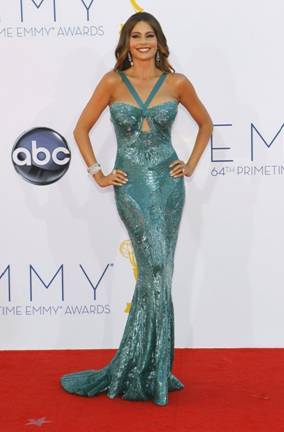 Thomas John’s Color Reading:  “Sofia Vergara left little to the imagination in a figure-hugging Zuhair Murad gown, sported with 175 carats of Neil Lane jewelry and a cascade of curls.  Green is the color of the heart chakra, also known as the Anahata, and thus is typically linked with love, fertility and growth, perhaps a sign of newfound stability for Sofia and fiancé, Nick Loeb. Different shades of green mean different things though, and teal-green typically symbolizes strength, power, and confidence (which I’m sure she was feeling when she entered the red carpet with an entourage of thirteen).  Sofia was trying to tell us, “I’m here and I have no fear!” in this dress. Though she was topped for Best Supporting Leading Actress in a comedy series by co-star Julia Bowen, Vergara still portrayed confidence and swagger as the night progressed, which isn’t surprising as this is her third nomination for an Emmy as a cast member of Modern Family. Personally, I would have preferred to see her take on a red color which is more sensual and sexual, but also brings the self-confidence aspect of things.” 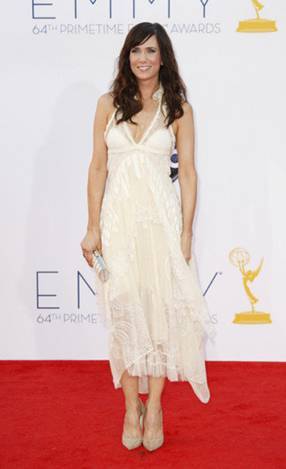 Thomas John’s Color Reading:  “Kristen Wiig arrived on the Emmys red carpet in an ethereal, cream-colored Balenciaga dress, accessorized with gold accessories.  This very bohemian-chic outfit I felt made her stand out in a sea of over complicated looks. Though she was beat out for the Best Supporting Actress in a Comedy Series award, her bright and curious tan is a color character of the mental family, and wearing this color is suggestive of someone who is logical, sequential, and well thought out.  I thought the dress revealed her to be grounded and well prepared, and you could feel from her that there was little anxiety coming from her, and she was just going with the flow, ready for a win or a loss.” 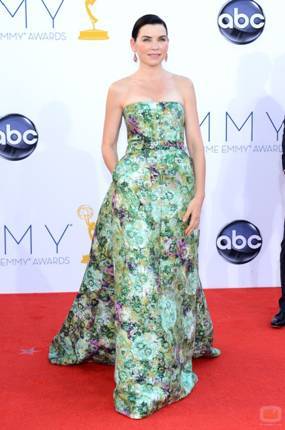 Thomas John’s Color Reading:  “Julianna Margulies looked like a regal queen in this strapless floral printed brocade gown from Giambattista Valli Haute Couture with greens and purples. Purple is the most spiritually evolved color, and green again shows confidence, strength and power.  Though Claire Danes won the Best Leading Actress in a Drama Series where Julianna was nominated, in her warm, intellectual, and creative yellow, Julianna’s dress was communicating vitality and elegance. Purple is also the color of visionary and clear thinking.  It is typically worn by people who are trying to represent that they are trend setters or that their mission on Earth is to do important work.  Not surprising that that Julianna’s floral gown set a trend on the red carpet at this year’s awards.” 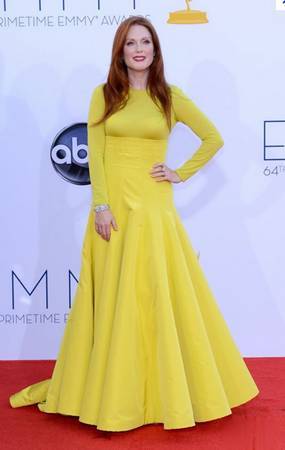 Thomas John’s Color Reading:  “How could you miss Julianne Moore in this yellow Dior full silk skirt with knitted cashmere top adorned with Fred Leighton jewels?  Beyond happiness, yellow symbolizes intellect, creativity, and clarity of thought–almost a sense of fearlessness.  Interestingly, when Yellow comes through in someone’s aura, it typically means that someone feels they have the life purpose to bring joy to people, to have fun, and to help heal the planet.  People with yellow auras tend to also be playful, fun characters with a great sense of humor.  Now just because someone wears a color doesn’t mean thats the color of their aura, but on this night, I saw yellow in Julianne’s outfit and in her aura.  Julianne was in a funny, playful mood it seemed, especially when she made a few quips about Sarah Palin during her award speech.  But it’s also not surprising because of this aura color that she’s a part of a series that has some serious contributions to make to the social and political thought of our country.” 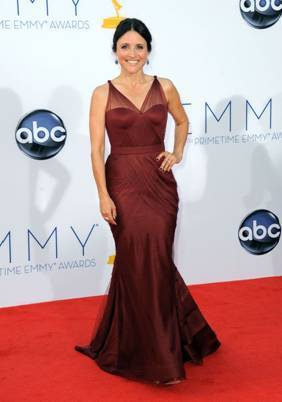 Thomas John’s Color Reading:  “Julia Louis-Dreyfus arrived in an oxblood Vera Wang to the 2012 Emmy Awards red carpet with just a touch of color added with Irene Neuwirth earrings and ring.  This deep dark red and brown color combines power and sexuality.  She kept her makeup and hair simple, so the focus is really on Julia’s presence and energy.  To me, this gown is telling everyone that Julia’s here and ready for the “kill” (and the irony is not lost on the fact that Hunger Games Catching Fire star Jena Malone also showed up in the same color…get it, kill?) It’s one of the most intense outfits of the night sported by the celebrities by far, and this powerful combination seems to have taken JLD to the top as she scored the win.”

The everyday antics of Hollywood may be intriguing and hard to predict for most of us, but not for celebrity psychic Thomas John.  Psychic Medium and Clairvoyant Thomas John began making accurate predictions at the age of four. Since 2010, he has focused his efforts on mediumship and psychic advice, maintaining a full-time, private practice dedicated to helping people around the world connect with loved ones on the other side through his spiritual gift.  I have had a number of amazingly accurate readings with Thomas and highly recommend him.

Join Me Tonight For Halloween With Thomas John!