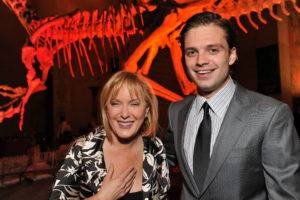 For more than four decades, the American Museum of Natural History’s Museum Dance has captured the attention and imagination of 800 young New Yorkers for a spectacular evening of dinner, dancing, fun, and philanthropy at the Museum.  This event celebrates and raises essential funds for the Museum’s scientific and educational programs, which enable thousands of underserved New York City school children to visit the Museum annually.  Over 1,000 guests attended this year’s event, themed Spring Safari.

The event began with cocktails in the Theodore Roosevelt Rotunda and dinner in the Milstein Hall of Ocean Life followed by dessert and dancing for all in the Akeley Hall of African Mammals.  Music was provided by DJs Harley Viera-Newton and Cassie Coane.  Throughout the evening, there was a silent auction with luxury items from many of New York’s most exclusive retailers. Vodka was generously donated by Double Cross Vodka.

The Museum Dance was generously sponsored by Lilly Pulitzer, whose signature prints have had a history of raising awareness for great causes.  The Pulitzer spring collection features bold and colorful designs, all inspired by endangered species.  In keeping with this year’s theme—a wild time will be had by all!