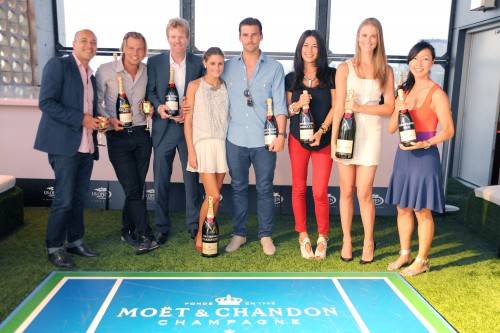 Yesterday Julie Henderson, Rebecca Minkoff, Olivia Palermo, and boyfriend Johannes Huebl, among others, competed in friendly matches of tennis at the first annual Moet & Chandon Tiny Tennis Invitational in celebration of the start of the US Open.  Upon the grassy rooftop of The Standard Hotel, exhibition players, including Henderson, Minkoff, Palermo, Huebl, Horacio Silva and Bee-Shyuan Chang faced off against each other and guests, while VP of Moet & Chandon Ludovic du Plessis watched on with referee tennis legend Jim Courier. Guests sipped Moet & Chandon Imperial champagne, the official champagne of the US Open, when not taking to the court to show off their tennis skills. Du Plessis wowed the crowd when he beat former number one US great Courier, but lost in the finals to Palermo, who took home the title of “Tiny Tennis” winner, and her very own Moet Jeroboam, crystalized with her name.

Palermo’s win only fueled Du Plessis’ hunger for true (not tiny) tennis, as he raced over to Moet‘s suite at the US Open to watch Serena Williams win her match, while entertaining actress Amanda Seyfried, who spent the evening taking in tennis from the suite. Though unable to watch Andy Murray’s big win in the Olympics this year, Amanda discussed with the Moet VP how a big tennis fan she is. With her close pal in tow, the actress enjoyed Moet & Chandon champagne from golden goblets and picked on Morimoto sushi (a delight the actress had surprisingly not heard of before!) Before leaving, Amanda made sure to lend her signature to the crystalized US Open Moet Jeroboam bottle in the suite, signed by Susan Sarandon, Alec Baldwin, Stanley Tucci and Selita Ebanks the night prior, which will be auctioned off for tennis charity USTA Serves.

On American Idol, The Republican Convention, and Dueling Black Bloggers