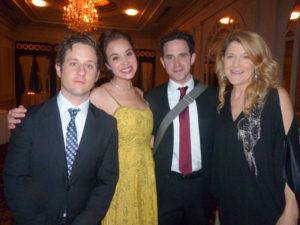 On Monday, The Collegiate Chorale presented their annual Spring Benefit 2010 Ted Sperling and Friends at The Hudson Theatre in the Millennium Broadway Hotel (145 W. 44th Street b/tw 6th and Broadway). It was a marvelous evening with a buffet dinner reception followed by a performance hosted by Ted Sperling. Mr Sperling is a musical legend and I felt honored to meet him!  He won the 2005 Tony and Drama Desk Awards for his orchestrations of The Light in the Piazza, for which he was also music director.  His Broadway credits as music director/conductor/ pianist include: Dirty Rotten Scoundrels, The Full Monty, How To Succeed In Business Without Really Trying, Kiss of the Spider Woman, Angels in America, My Favorite Year, Falsettos, Drood, Les Miserables, Roza and Sunday In the Park With George.  Mr. Sperling was also an original cast member of the Broadway musical Titanic.  His Off-Broadway credits as music director include: A Man of No Importance, Wise Guys, A New Brain, Saturn Returns, Floyd Collins, Falsettoland, and Romance in Hard Times.  As a stage director, his credits include:Charlotte: Life? Or Theater? and Striking 12, as well as a revival of Lady in the Dark starring Andrea Marcovicci. He also conducted the musical scores for the films The Manchurian Candidate and Everything Is Illuminated, and directed the short musical film Love, Mom, starring Tonya Pinkins.

About The Collegiate Chorale

The Collegiate Chorale among New York’s foremost vocal ensembles, has added to the richness of the city’s cultural fabric for more than 65 years.  Founded in 1941 by the legendary conductor Robert Shaw, The Chorale achieved national and international prominence under the leadership of Robert Bass.  The Chorale has established a preeminent reputation for its interpretations of the traditional choral repertoire, vocal works by American composers, and rarely heard operas-in-concert, as well as commissions and premieres of new works by today’s most exciting creative artists.  In the summer of 2009, The Chorale performed for the fourth season at Switzerland’s Verbier Music Festival. In July 2008, The Chorale toured with the Israel Philharmonic Orchestra under Zubin Mehta in Tel Aviv, Haifa, and Jerusalem.  Recently, The Chorale presented the world premiere two-act concert version of Ricky Ian Gordon‘s opera The Grapes of Wrath at Carnegie Hall to great critical acclaim.

The mission of The Collegiate Chorale is to enrich its audiences through innovative programming and exceptional performances of a broad range of vocal music featuring a premiere choral ensemble.  Inherent in its mission is The Chorale’s belief that choral music is a compelling collaboration that creates a powerful, shared experience unifying listeners and musicians of all backgrounds, beliefs and ages.

For more information and upcoming concerts go to:  http://www.collegiatechorale.org/