Dispatches From The Occupation, Opinion
July 18, 2018
by That Girl At the Party
0 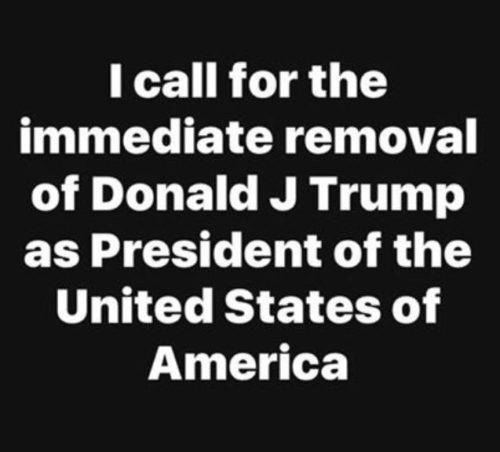 The man in our White House is a Russian asset, a unrepentant fool and a narcissistic psycho, who is blatantly committing treason, collusion and obstruction of justice right before our eyes. His ridiculous fawning over Putin, a brutal dictator, who does not allow any dissent from Russian citizens, murders his opponents, invaded a neighboring country and poisoned people in England, – a country which has been our ally for decades –  to name just a few.

It is well past time for the GOP led Congress to stop enabling this blatantly obvious nonsense. Trump has never even tried to hide the multitude of likely crimes he has committed. He openly attempts to obstruct justice daily. DAILY. His behavior at this week’s Helsinki summit with Putin – which was aptly named the “Treason Summit” – was the greatest betrayal of our country in its history. It would be like Winston Churchill giving Hitler Great Britain’s war plans during WWII. It was an act of treason televised for millions to see. His imbecilic claims after the fact were completely pathetic. To actually state he meant “wouldn’t” when he said “would” and that he secretly was tough on Putin behind closed doors after standing at the podium, with his puppet strings clearly on display, were insults to the intelligence of even the most ignorant American.

And as I write this the New York Times has just released a report that on January 6th, 2017, two weeks before the inauguration, Trump was briefed and shown texts and emails from Russian military officers by our intelligence community that proved beyond a shadow of a doubt that Putin personally ordered the election hack that helped him win. This means that for the last year and a half, every time Trump has said that he did not know whether Putin hacked our elections, including when he stated it could be a “four hundred pound guy in a basement” or “other people”, he has LIED to the American people and the world. This means that every time he claims that the Mueller investigation is a “witch hunt” he is LYING to the American people and the world. It means that every tweet, false statement, and other nonsense he and his administration spout daily is a BLATANT LIE being told to America and the world! It means that Trump has been involved in covering up a Russian attack on our nation for the past year and a half. The thousands of times he has lied and claimed there was “no collusion”. The thousands of attacks on our FBI and intelligence community when he knew – HE KNEW – that Putin attacked our country is treason and also obstruction of justice!

Every single – EVERY SINGLE – great American that fought so hard for our democracy from the Founding Fathers to the Abolitionists to the Civil Rights leaders to Women’s Rights is rolling in his or her grave. 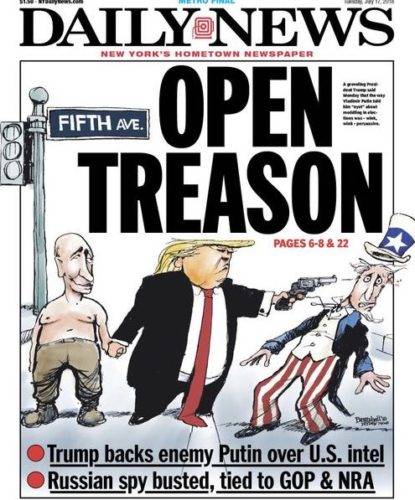 Trump’s collusion and attempt to cover it up has left our country in serious peril and makes him the gravest and most serious national security threat in American history ( I mean for all of us black, white or any other nationality. Naturally for my ancestors, who were slaves and Native Americans, there were greater threats to their security). We have a Russian plant in our White House. Process that people. Our country has been invaded from within and is now being run by a foreign adversary! Congress needs to act now or we will all be very sorry later.

In the three days since his monumental treason summit knee-dropping, the Trump administration actually considered handing over American citizens to Putin, a brutal dictator who has murdered his adversaries. Are we actually going to allow this? What would stop Trump from turning over EVERY American he disagrees with or he feels does not love him enough – congresspeople, businessmen, President Obama, Hillary Clinton and hell, me and the other 60 percent of Americans that do not support him, particularly those of us that are vocal, to Putin? In addition, Putin is attempting to further insinuate himself into our democracy by stating that he does not want the American translator from their secret meeting interviewed by our Congress. Why does he think he has the right to say anything like this? We, the American people, demand that the translator tell us what was said, particularly since it is clear that Trump is compromised.

How much worst does this situation have to get? How much clearer can it be that Trump is not acting in America’s interest? Today, instead of heeding days of disapproval over his kowtowing to Putin, the Russian planted Idiot-In-Chief claimed he was planning a second meeting with his master on American soil right before our midterms. It is too obvious that in his deranged world, it is not “America First”. It is “Trump First” now that Putin has him by the short and curlies. Everyone is looking for additional stuff, like the pee-pee tape, that Putin and the Russians have on Trump. But the fact that Trump knows he colluded with Russia to steal the election is going to be enough to keep him doing Putin’s bidding for as long as Americans allow it. Trump will not and cannot ever cross Putin now. It would mean removal from office and prison. Thus, it is time for Congress to act. Even though the Democrats are not in the majority, they need to stand the hell up, file impeachment and let the nation see that the GOP is now comprised of a cabal of treasonous, anti-American enablers. We have passed the point of no return.

DevaCurl Kicks Off CurlFest With A Curly Girl Meet-Up