Dispatches From The Occupation, Opinion
October 30, 2018
by That Girl At the Party
1

I have had enough tears and I have had enough anger at the continuing racist and anti-Semetic dog whistling from Donald Trump, the narcissistic psychopath that was placed in our White House by Putin and the  people in America, who Clinton aptly dubbed “deplorable.” Anyone still supporting Trump is just that, deplorable. (And that includes you, Cherie Corso!) With all the hate and killings that are a direct result of this man’s careless bullying and lies, there is no just no excuse. You can no longer just claim “the economy is doing well.” People are dying due to his crazy! It is time to stop allowing this nut and his minions, like Ted Cruz, Kellyanne Conway and Sarah Sanders, to continue to enable and spout despicable lies about what is actually going on. No, the attempted bombings and the eleven murders in the Pittsburgh synagogue are NOT due to speech or action from “both sides.”

Crazed white men are killing and attempting to kill AMERICANS based on the hate and lies that Donald Trump, Fox News and other Republican mouthpieces are putting out daily. They are attempting to kill and actually killing AMERICANS because of the support of white supremacism that emanates from the White House…daily!  This has zero to do with Democrats or the left. Yelling at people in restaurants that are supposed to be representing your interests and are not doing so, is not attempted murder by bombing, Yelling is also not murdering people. The monsters that sent bombs and killed people are racist and right-winged white males acting on the conspiratorial seeds that TRUMP and his people are planting in their heads. Bowers, the Pittsburgh shooter, admitted he killed eleven innocent Jewish people because he was angry about the “migrant caravan”, which Trump lied and claimed contained “Middle Easterners” funded by the Jewish community coming to kill Americans. Sayoc, the MAGA bomber, was also a Trump fanatic and targeted his critics, as was Bush, the Kentucky shooter, who murdered two elderly black people at a Kroger. 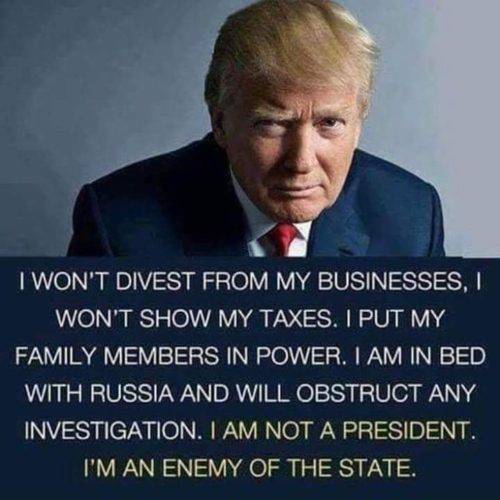 Trump (who I prefer to refer to as “Chump” or “Fake President Cray Cray”) is obviously insane and fashions himself as a modern-day Hitler. We are almost two years into Chump’s installation now. We need to stop expecting a man, who is incapable of showing empathy, to do so when we have tragedies. We should accept that Trump is never going to be anyone other than the narcissistic psycho he is. He is 72 years old and is not willing to even attempt to act in accordance to his supposed role as a President. He is, in fact, not our President. We were invaded. He is a Russian-planted, narcissist and crooked con man that only cares about himself. His rally speeches and his hyperbolic tweets reveal a man, who is clearly not fit to lead this nation. His continuing kowtowing to Putin also exposes him as the Russian compromised puppet that he is. His support of dictators the world over and his attacks on the media are emblematic of his fascist leanings.

Everything, including the deaths of Americans, will be put through the filter of how Trump feels it affects him personally. Even after the attempted assassinations of former Presidents, current Congresspeople, and news outlets, Chump was still attacking the people, who received the bombs, rather than calling to make sure that the intended victims were okay. On Saturday, he quipped about canceling his rally, not because eleven Americans had just lost their lives just hours before, but because he was “having a bad hair day”!

So it is time to accept some truths people. Trump is sick in the head. PERIOD! He is a fraud, an Emperor with no clothes, a pathological gaslighting liar. He has always been a racist, anti-Semetic and crooked con man. He has bankrupted numerous businesses and will run our economy into the ground. He will, if allowed to continue on his current path, destroy our democracy and possibly cause a civil war.  He doesn’t care or have empathy for other people. It is time that we stop expecting him to care about anyone but himself. He can’t, he doesn’t and he won’t. He will never be able to govern, comfort or lead. PERIOD!  And the GOP is so corrupt that they are allowing Trump to do and say all manner of heinous things to fulfill their white supremacist and greedy agenda. So we need to stop falling for their nonsense too. Flake, Sasse and Collins are perfect examples of how the GOP will enable this psycho. Oh sure, they will feign concern. But when we need them to actually stand up, they won’t. And not only will they not stand up, because many of them are also compromised by Russia, so can’t do anything. 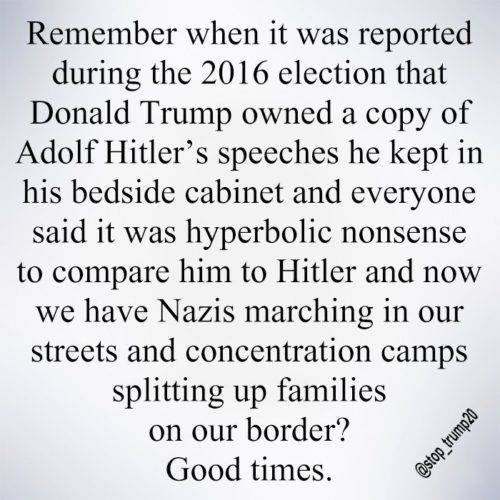 I also do blame the mainstream media for following Trump down his rabbit hole. I work from home, so have CNN and MSNBC on behind me all day. I am tired of daily the wave of pundits coming on CNN and MSNBC hand-wringing about his latest sick self-involved act or tweet. Rather than continue to report on Chump’s insanity, we need the media to report on the human toll and loss that America and the world is experiencing from his actions and words. For example, where are the migrant children that were kidnapped from their families? It has been months since a court ordered the children returned – where are they now? Why not embed a journalist in with the centers holding the kids? Why not embed a journalist with the migrant workers and refugees coming up from Honduras? We need visuals that prove that Chump is lying.  And why was so little said last week about Putin basically admitting that he installed Chump to wreck our country and end the status of the US as a superpower? He also stated that “Trump listens well”! Yet in that same week, what was our supposed President doing to combat this Russian threat? Why naturally, he was inviting Putin to our White House, likely to celebrate the first year of Putin’s invasion and takeover of our oval office.

We, the American people, are better than this. We can stop this madness. On November 6th, we need to take back the Congress, so that we have a check on this nut. Otherwise, our nation will continue to head towards chaos. People will continue to die at the hands of the crazies, like Sayoc from Florida, Bush in Kentucky and Bowers in Pennsylvania that he inspires or the GOP policies, like stripping healthcare from people with pre-existing conditions. I have had enough tears. We have got to save our nation. Because it is only going to get far worse, if we don’t.