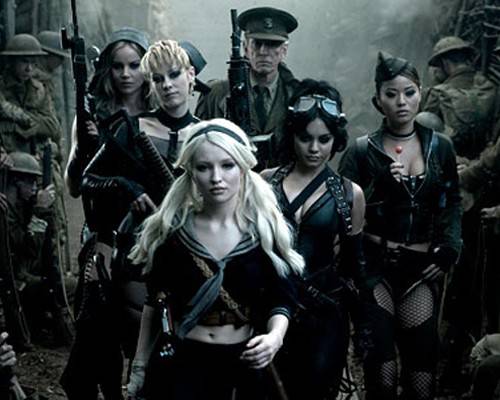 Sucka Punch is definitely the worst movie so far this year!  Not an OCO film, this is what I dub a “starving people could’ve been fed with this budget” film!  In other words, money was severely wasted!  With a jumbled mess of a plot that seemed to take us into the Director’s acid fueled, wet dream, this movie is a definite miss!  Maybe if you see it on video after you score some really good weed, maybe just maybe, it might make sense to you!

The story goes something like this:  A girl, oddly named “Baby Doll” loses her Mom.  When her stepdad tries to get with her baby sister, Baby Doll tries to shoot him dead.  But being a dreadful aim, she kills her poor baby sister instead.  Stepdad then carts Baby Doll off to the looney bin, where a corrupt orderly takes a payoff from the Stepdad to forge the signature of Dr. Vera (Carla Guigno in full Domanitrix mode).  He’s order a full frontal lobotomy to be performed by another doctor (Jon Hamm in a bad career move!) on Baby Doll in five days.  Cut to a strip joint where Baby Doll does a dance that carts her off into a video game world where she meets a shaman in the form  Scott Glenn doing his best David Carradine imitation.  The Shaman dude then gives her some random advice about needing five things including a map, a key, fire, and a knife in order to be free.  (I know that’s only four but that’s how they left it!) She then kicks some robot ass, video game style, and returns to the strip club/brothel where the crazy pimp guy/orderly sees cash to be made from her dancing.  The rest of the movie involves Baby Doll dancing between the different parallel universes, in her school girl outfit and pigtails, on a quest to get the five elements.  In the process most of the major characters, including an innocent baby dragon and his mom, get popped off for no reason.

Confused?  So was TGATP and most of my fellow critics at the press screening!  At one point I actually started trying to tie it all together but got bored with the effort.  Ultimately, my imaginary version of the plot was more cohesive than the actual one.  The “dance” scenes where our heroine entered the video game type world, entertaining at first, also wore thin.  While these scenes utilized Synder’s unique CGI effects, I would much rather play a video game than watch a movie shot like one being played!  (Hope I can get the game for my new Nintendo 3DS!)  And there is simply nothing worse than a clueless story that tries to preach something profound at the end.  It welcomes instant parody and shows a shallowness on the part of the writer and brings unintended giggles from the peanut gallery!

The only people getting “sucka punched” will be the poor folks who paid to see this drivel!  Sucka Punch is a total misfire since even the adolescent geek boys (and men!) that this movie is obviously targeted at require a smart plot with their T&A!  The acting is irrelevant because the story was as scanty as the costumes!  All the gals Browning, Hudgens, Malone, Cornish, Chung, and Gugino look hot and there is something for every male or lesbian fantasy. Unfortunately, one of TGATP’s favorite male fantasies, Jon Hamm is under utilized and should fire his agent!  But then, I was not the target audience!

I met Zack Snyder last year and really dug his energy.  Here’s hoping that he does a better job with his upcoming revamp of the already overworked “Superman” than he did with this!  (Really Zack, conjuring up an original story with a school girl in a strip joint/brothel setting kicking butt?  Isn’t that a little TMI?  I feel like I really KNOW you now!)

That said, I do want to congratulate the Music Supervisor, who did a bang-up job on the hard driven soundtrack.  I plan to download it for my workouts, so perhaps when the movie bombs some of the millions it took to make it, can be recouped from the soundtrack and the video game.  I would also suggest that, in the future, if a movie is this bad, but is shot in 3D, that the studio make sure critics see it in 3D.  Perhaps, at least then, we could recommend the 3D effects!

Bridesmaids is a Miss!