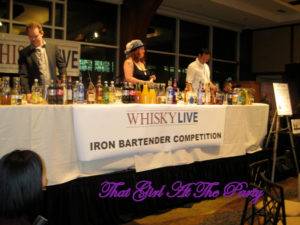 Did you know that 27% of new whisky drinkers are women?  I learned this fun fact on Wednesday night while drinking a glass of Bulleit Bourbon at the Whisky Live show! I was told this and some other interesting Whisky facts by Cheryl Alagna, whose official title is Master of Whisky.  Cheryl is one of only 4 female whisky masters (there are 15 total) in the world.  Armed with this my newfound knowledge and my two BFFs, I was determined to gain a strong appreciation for whisky, or at least, taste some damn good whiskies in the process.

Held at one of my favorite event venues, Pier 60 at the Chelsea Piers, Whisky Live is an annual  expo that brings the joys of whisky to cities all over the world –  from New Delhi to London to Shanghai to the Big Apple.  During the event, some of the best and most expensive whiskies can be sampled including the Glenlivet XXV (25-year-old), Laphroaig (10-year-old cask strength), and the Ardbeg Uigeadail.  There’s nothing like sipping a cocktail (or straight whisky!) on the balcony while watching the sun set over the Hudson – beautiful!

At Whisky Live each attendee gets 6 or 10 vouchers, good for a tasting, at each of over 60 exhibitor booths.  If that’s not enough whisky for you, you can purchase additional vouchers for $2 each.  There are also workshops, a buffet dinner, a bartender cocktail competition, and LOTS of hot men wearing kilts.

My friends and I spent a good chunk of our vouchers at the booth that paired chocolate truffles from The Chocolate Garden with top whiskies.  I had a dark chocolate raspberry truffle with Laphroaig 10 yr old and a milk chocolate orange truffle paired with Ardmore Traditional – heaven!

Now I know what you’re thinking:  Whisky is way too strong for me!  How can I possibly ever learn to appreciate it?

It will take some effort on your part.  But here are some tips that’ll have you drinking whisky with the best of ’em:

Launch of The mun2 Look