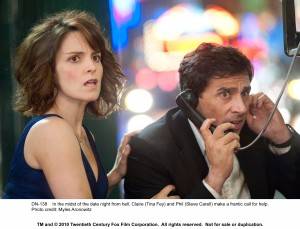 Date Night is the first hilarious TGATP comedy must see of the decade! Tina Fey and Steve Carell are pitch perfect, as Phil and Claire Foster, a New Jersey couple, who are worried that the spark has gone out of their marriage.  They are desperate not to become, like their recently separated friends, just “excellent roommates”.

What starts out as their weekly “date night” turns into a surreal nightmare, when in order to get a table at one of NYC’s hottest restaurants, they claim to be “the Tripplehorns “ and steal their reservation. Unbeknowst to them, the n0-show couple is being pursued by both the mob and corrupt cops!  What follows is a night of hijinks, as they try to stay one step ahead of their pursuers.

As directed by Shawn Levy, the movie is a bit formulaic and doesn’t traverse any new comedic ground with the first half of the film much funnier than the second.  In addition,  I would have loved to have seen a more intricate plot involving more strange  NYC characters, a la Scorsese’s “After Hours“.  But overall, Date Night delivers with some truly classic comedic moments provided, both by Fey and Carell, and a bevy of stars in cameos.  James Franco and Milas Kunis are especially hilarious as the actual Tripplehorns.  In addition, Mark Walberg is both red hot and memorably cool, as a chronically shirtless, former special ops agent, who assists the Fosters.  Taraji P. Henson is her usual tough girl self as the detective investigating the case.

For a fun “date night” of your own or a gut busting movie night with friends, Date Night is just the ticket!

Oz is a Magical Fun-Filled Ride!