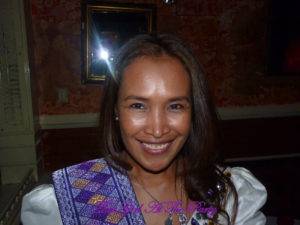 Last night, a party was thrown at the Box (168 Chrystie St.) in honor of The Somaly Mam Foundation and founder Somaly Mam. Lauren Bush, in attendance with her mom Sharon, was  the guest of honor.  The host committee included Amanda Brooks, Anh Duong, Katie Ford, Kiara Kabukuru, Josh Lucas, and Alexis Tobin.

The party debuted a line of Somaly Mam empowerment scarves and pendants. Both carry the heart and hand symbol designed by Somaly Mam, a reminder that the world will only be moved when we bring together hearts and hands, merging compassion with action. Bill Livermore, the executive director of The Somaly Mam Foundation, gave a speech introducing Somaly Mam and Lauren Bush and thanking all who were involved with the evening.

“I see their commitment to helping others reflected in all of you here tonight. Together we honor the brave and resilient survivors who have worked so hard to build new and sustainable lives for themselves,” said Mr. Livermore.

Guests were treated to an eclectic variety show by The Box performers as well as a special dance performance using the new Somaly Mam scarves, choreographed by Jermaine Browne, who has worked with artists like Christina Aguilera, Jennifer Lopez and Justin Timberlake. Guests enjoyed champagne, eco-friendly cocktails courtesy of VeeV and desserts created by the Box’s executive chef, Justin Hilbert. As guests left they were treated to a gift bag, generously donated by The Body Shop.

ABOUT THE SOMALY MAM FOUNDATION

Somaly Mam, herself a survivor of human trafficking, has founded the largest shelters in Southeast Asia and has rescued more than 6,000 young women and girls over the past ten years. Universally recognized as a visionary for her courage, Somaly was honored as one of Time Magazine’s 100 Most Influential People of 2009. She is also the recipient of the first Roland Berger Human Dignity Award, the Prince of Asturias Award for International Cooperation, The World’s Children’s Prize for the Rights of the Child (WCPRC), Glamour Magazine’s 2006 Woman of the Year Award, and has won accolades from the US Department of Homeland Security.  As she wrote in her autobiography, The Road to Lost Innocence, “People ask me how I can bear to keep doing what I do.  I’ll tell you.  The evil that’s been done to me is what propels me on.  Is there any other way to exorcise it?”

Founded in 2007, the Somaly Mam Foundation is dedicated to ending slavery around the world with a results-oriented, three-step approach: Survivor Services, Advocacy, and Awareness. The common thread woven through all of its programs is the collective voice of the survivors. The foundation models its vision after Somaly’s inspiring life, ensuring that survivors take charge in reclaiming their lives while refusing to turn their backs on those who remain behind.

Human trafficking, a multi-billion dollar industry, is the fastest growing criminal enterprise in the world. With over two million women and children sold into sexual slavery each year, it is a global crisis that must be stopped.

Best In Beauty For Holiday 2015