Arena held an event planners party that was done just right with a full open bar, passed hor d’oeuvres, aerial burlesque from the incredible Veruca Honey Scotch, and sounds from DJ Gatsby.  The new manager Gina, fresh from a stint at the Plaza’s Oak Room, was the perfect hostess with the mostest, making sure to greet every single guest!  I just loved the projected games supplied by Reactrix and couldn’t stop playing them.  The wait staff was both hot and attentive.  Guests were also treated to dance music from a live band.  On top of all that, we were invited to hang out in Pulse, the karaoke bar downstairs.  I was crying laughing watching drunk partygoers murder pop hits!  One guy just slaughtered Lil’ Wayne’s “Lollipop.” I would love to throw a TGATP soiree at Arena in the future! 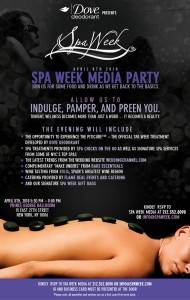 Glad I decided to stay at Arena rather than be my friend’s plus one for the Spa Week Media Party, which was according to my spies, as much a mess, as it was back in October!  Guess it has truly jumped the proverbial event shark!  The organizers, once again, snubbed numerous legitimate press outlets in favor of party crashers, which is a business move I just don’t get.  Isn’t the point to get Dove and your other sponsors good press and create marketing opportunities between the sponsors and editors?  They might as well just rename the event the “Spa Week Crasher’s Party” because media is regularly and inexplicably snubbed!  One source relayed that she saw no legitimate beauty editors and no exciting new beauty innovations to write about and that the event was a complete waste of her time.  Another source relayed that the infamous unemployed and homeless crasher was in attendance.  He rsvp’d as coming from a random fashion magazine and even brought along the guy who’s couch he sleeps on, who is also in no way affiliated.  Both were given entry and a bag.  In addition, while I talked to several colleagues who’s rsvps were declined and/or who were refused a bag at the party, a slew of crashers turned up at Arena, with the gift bags in tow!  I mean, honestly, this is just sheer laziness on the part of the organizers!  Or perhaps, Spa Week Media Group is actually a charitable organization for homeless crashers!  Plus, a perusal of the swag revealed that the recession has definitely hit the formerly fabulous gift bag.  Once filled with expensive and exclusive brands, it is now loaded with stuff that is already in your bathroom cabinet or easily acquired on any trip to CVS! Just a truly sad state of party affairs all around!

This morning, Al of Spa Week Media Group kindly offered to send TGATP a complimentary “spa week chapstick” since we had to miss their event.  I think we’ll pass.