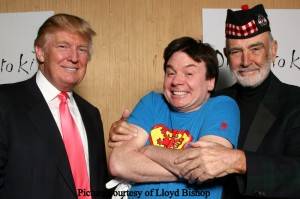 Last night, the annual Dressed to Kilt gala took place at the M2 Ultra Lounge in New York City.  Hosted by Sir Sean and Lady Micheline Connery and dubbed “Mad for Scotland”, the event featured a celebrity fashion show and celebration of all things Scottish – from kilts and couture to haggis and whiskey.