The national embarrassment that is Donald J. Trump is set take his circus on the road and wreak further havoc in other parts of the world. Reports are that, based on the four months of interactions with the Emperor-With-No-Clothes, foreign leaders and their consultants have set the following rules for his visits: 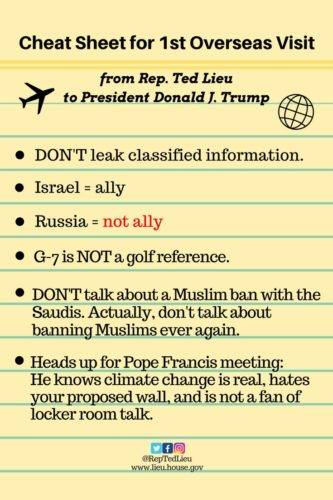 This brief period – (I know that Don’s time in office will be blissfully short) – will be considered the Dark Ages by our ancestors. Our only hope is that Trump loses his passport and is not able to re-enter the country. Or perhaps without his staff’s ability to totally isolate him from world opinion, he will see how hated he is on the world stage and finally resign. Or maybe, more evidence will come out of his collusion with the Russians and he will divert his return and seek asylum in Russia, the country he is truly serving. A gal can wish!