Dispatches From The Occupation, Opinion
January 17, 2018
by That Girl At the Party
0 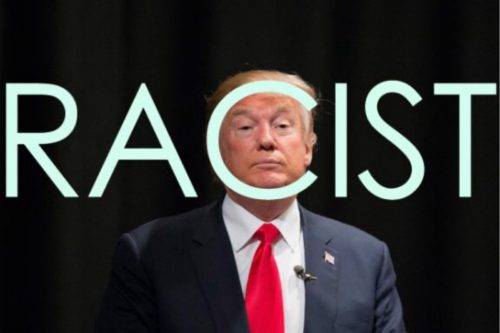 Donald Trump is a racist. There I said it. Trump’s white supremacist beliefs have been the nasty, vile, ginormous elephant in the room since he first announced his candidacy and throughout his trail of fears campaign His racist tendencies have been on constant display during the first topsy-turvy year of his White House occupancy.

It is time for the media and the GOP to stop dancing around the fact that the man currently inhabiting our White House is a racist. His comments and actions are not “racially charged” they are not “racially ignorant”, they are racist! It is time for the media and the GOP to call this what it is.  Trump has never made any bones about it. He reportedly even revels in stirring up the racism in his basest of base members. While it is more readily understood why Rand Paul and Trump’s GOP minions are trying to brush this back under the carpet. Many of them are racist too. Why are journalists afraid and refusing to call it? The media has no excuse. Just saying “this is who Trump is” is not cutting it and as a woman of color, I am not going to put up with it. If you are protecting the Racist-In-Chief, you are a racist yourself. (That means you Rich Lowry. Your comments on This Week on Sunday where you simply replaced “shithole” with “basket case” was as racist as what Trump said.)

We, as African Americans and other people of color, do not have the luxury of couching Trump’s racism (or anyone else’s for that matter), as anything but what it is. Because he is actively proposing and attempting to enact POLICIES  based on his racist views. When a white person is racist, it has effects. From what jobs we get to where we live to how our kids fare to whether we have proper healthcare and on and on, racism determines every aspect of our lives. Too many white Americans ignore their own racism or are oblivious to Trump’s. But in Trump’s case, white Americans can’t ignore his hatred either. His blanket racism is going to adversely affect poor and middle class white people too. For example, his racist belief that black people are lazy and that it is mostly black Americans that receive welfare and Medicaid is fueling his cruel attempt to force people on Medicaid to work for their healthcare. Yet this nonsense is going to affect millions of people and most of them are not people of color. His racist hate of President Obama is also fueling his attempt to overturn Obamacare, which will be a disaster for millions of people white, black, Asian, hispanic and every racial category in between.

Here is a timeline of just the racist things he has said and done that we know printed from Vox: (I was going to do my own but they laid it out so wonderfully, I didn’t need to.)

And finally, here is an interesting video from Complex News of people, who are from countries that the Racist-In-Chief called “shitholes” have all accomplished far more positive change than he has or ever will.

Hey World Keep Donald! We Don’t Want Him Back!