Dispatches From The Occupation, Opinion
July 29, 2017
by That Girl At the Party
0

Many pundits are repeatedly comparing the crimes of the manchild and the “administration”, currently residing in the White House, to Richard Nixon and Watergate. But I beg to differ. The situation is far, far worse. Never before has the Constitution been so completely under attack. Never before has half the country been so lost as to seemingly approve treason on the part of the people residing in the White House. America is ungoverned, we no longer have a functioning Presidency or a Congress and administration. We have a Mob Boss and his extensive syndicate.

Trump’s supporters are too far gone to fully understand the extent of how jacked up this situation is. From their clueless social postings, they demonstrate daily that they are locked in a fantasy world and/or trapped in the cult of personality that the Emperor-With-No-Clothes represents. So I do not believe that this sociopath will ever be impeached or indicted even if he fires Mueller. Because, despite obvious crimes and blatant violations of the Emoluments Clause and repeated confessions from Trump, his family members and other minions, his millions of supporters are so ignorant that they don’t even think Trump or his criminal minions should be being investigated to begin with. These same ignorant people also see nothing wrong with handing the country over to Putin and the Russians.

Thus, the comparisons to Watergate are not apt. The 70’s were a different time. Back then Americans still had knowledge of the Constitution and how a President is supposed to act. There was also, despite the rampant racism that still is prevalent today, a sense of decency and honor. Truth mattered. Now we have reality tv “stars”, like Kim Kardashian and Bruce/Caitlin Jenner. Kim, parlayed an assistant job into a sex tape with her famous employer’s brother that her Mom sold to make the whole family famous! Bruce Jenner, an Olympic hero, confessed that he wore women’s undies under his suit and ultimately cut his organ off to become a woman. While this is his right and choice, what makes Jenner’s story an exercise in indecency and hypocrisy is his support of Trump and the GOP, the very party that wants to take rights away from other transgendered people. Other stars and American icons have confessed or been charged with everything from drugging and raping 60 women, to sexual assault, to killing dogs with their bare hands, to killing wives and all manner of other transgressions and crimes and are still working and lauded by segments of the society.

Unlike the 70’s, we also have the Internet of Things and, most importantly, social media. In the hands of healthy functioning adults, social media can be a valuable tool and connect the whole world. But in the wrong hands, it can be weaponized and allow unhinged adults, like Trump, to time travel back to their tween years. Three years ago, I was the victim of one such individual with a PR and Marketing Facebook group that trolled and defamed me in an attempt to derail both my site and my PR work. Fortunately, most people saw through this but it did cause significant financial losses and take some time to clear up. I bring this up to say that unfortunately, far too many adults take social media as gospel truth and Trump is using this to his advantage. Every day the Donald’s Twitter is a stream of cyberbullying, insults, fantasies, narcissistic bluster and outright lies. Who can forget the idiotic lie that President Obama was “wiretapping” him? Or his abuse of the NY Times, CNN Mika Brzezinski and numerous other press outlets?

Trump ran the most dirty, vile campaign in American history, spouting racist and sexist filth about Mexicans, black people, Muslims, women and every other group other than white men. In addition, he it blatantly clear that Trump, his son Donald Jr, his son-in-law Jared Kushner, his entire campaign team and possibly the GOP colluded with the Russians to help him win. But Trump has cleverly used Hitler tactics in painting the media as “fake news” causing his flock to be confused into questioning reports of actual facts. Everything that exposes and his administration’s crookedness is “fake news” for him while any praise is a fact. This is an obvious  tactic every dictator uses. Yet his supporters are buying into it. Trump once said he could shoot someone on Fifth Avenue and his supporters would still back him. I agree. In fact, he could shoot someone on Fifth Avenue, videotape himself doing it, then confess, and his cult-like following would claim it was an impersonator! 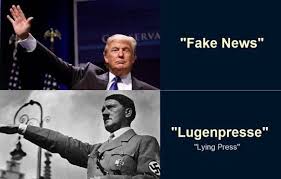 America, as we knew it before January 20th, 2017 is gone. We now have a narcissistic sociopath and his mouthpieces lying to our faces and then changing the lies ,or claiming they never said them, even though everything is on tape. Yet still his zombified supporters stay supportive. None of this was not true when Watergate happened. Watergate was a paper cut to our democracy, Trump Russia is equal to a decapitation!

Yet I still have Faith in my country. America WILL right this. I predict that Trump will not make it through a year and a half in office. And if he does, it will only be because he threw the Republican Party under the bus. Thus, we will no longer have a Republican majority Congress as of November 2018.

Try On Your Battington Lashes With Their New AR App

Celebrate #NationalLipstickDay With These Organic Brands!

Hey World Keep Donald! We Don’t Want Him Back!