Fortunately, for every lame event in the city there are at least three to five winners per night!  Started my night out at the STK 3rd Anniversary event, which ended up being a complete waste of time and a non-happening!  Although I rsvp’d and was confirmed, the idiot people forgot to put me on the list!  What an annoyance on a busy night, as I had 6 parties on the other side of town to cover, and really just longed to be home watching my beloved Yankees in their first World Series game since 2000!

The PR folks were still trying to figure it all out when I left and headed for what turned out to be two much better parties!  The first was the CAN IT! Vipp 70th Anniversary Charity Auction to benefit DIFFA: Design Industries Foundation Fighting AIDS held at Design Within Reach in Soho!  What a fabulous fete this was!  One of my heroes the wonderful Nigel Barker was in attendance, as were, Veronica Webb and Helena Christensen!  I ADORE Nigel!  Not only is he a real hottie, he is just so passionate about every single thing that he does.  From his photography to his work saving seals to his work to eradicate poverty to his work with AIDS awareness, he is quite simply the best!  I adore him as he sets the gold standard on how to merge commercial works with activism.  Got to hang with my gal Evette Rios, who was doing interviews for her blog at RachaelRay.com and caught up with drag Diva extraordinaire, Lady Bunny!  Also, ran into the wonderful Michael W., who I met at Fashion Week last year.  I am always glad to see him as he is psychic and always leaves me aghast with his spot-on observations.  Can’t wait to have him do an actual reading!  A fundraising auction was held for flip-top trashcans that were pimped out by celebrities including Yoko Ono, Ralph Lauren, Lady GaGa, Oscar De La Renta, David Stark, Calvin Klein, Robert Verdi, Lady Bunny, and more.  My favorite was Veronica Webb’s, which had an intricate African theme.  It came with jewelry that she also designed and a beautiful picture of her taken by Nigel.  This event was so amazing, fun, and vital that I ended up being glad that I didn’t linger at the over hyped STK event. 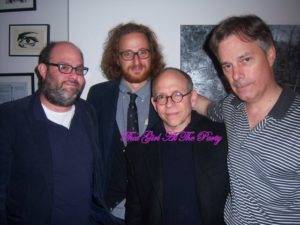 Afterwards, I was headed to a completely different event downtown, when my friend Christianna from NY Mag, (who also publishes a blog which has the most original name ever, Fashion Makes Me Horny!) kidnapped me.  She took me along with her to a film premiere party for “The Windmill Movie” that was totally awesome!  Met a bunch of really cool folks both in the movie biz and on the periphery of it.  Alexander Olch, the director was an absolute doll and it was great to meet Bob Balaban.  I was particularly thrilled to meet Whit Stillman, the legendary indie filmmaker who made two of my favorite films about NY Society life, Metropolitan and Barcelona.  We are well past due for another of his witty cinematic treatise on the “urban haute bourgeoisie”.

For more information on DIFFA:  http://www.diffa.org/ and checkout the trashcans at:  www.vipp.com/photo/nyc09.

And to check out Alexander’s film:  http://www.windmillmovie.com/#/trailer

Exclusive: Lady Gaga Goes to India and You Can Join Her!