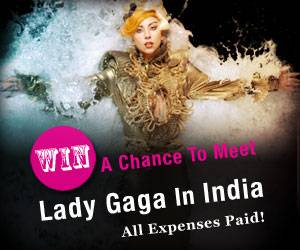 Lady Gaga is all set to greet her Indian monsters!  That’s right, Desi Hits is taking Gagita to India to meet and get to know her Indian fans.  India began buzzing about Lady Gaga when Desi Hits began creating Bollywood (Indian Hollywood) and Desi (South Asian) remixes to her tracks on “Born This Way.”  We had her track “Born This Way” remixed by famous Bollywood producers Salim-Sulaiman.   The remix was so well received worldwide that even celebrity blogger Perez Hilton blogged about it.  Along with getting to know her fans, Lady Gaga will also perform at Formula 1’s afterparty in New Delhi India on October 30th.  When I chatted with Lady Gaga about her trip she said, “I can’t wait to finally come to India. I am so excited.  In some ways I wish I could just throw on some heels and sprint all the way there to you right now.”  Mother monster is super excited about her trip and she has even created a contest where fans from anywhere in the world can meet her in India all expenses paid!  Be sure to enter if you love Gagita.   Just follow @tgatp on Twitter and like “That Girl At The Party” on Facebook to find out how!

Nicole Scherzinger  is “Right There” With South Asia

Nicole Scherzinger has been digging B-town (that hip talk for Bollywood!) for quite some time now.   First, she rocked a sexy black sari at the Pussycat Doll Day portion of Fashion Rocks, held for the launch of the 2008 NY fashion week.  Then she followed it up by doing a remix of the Slumdog Millionaire track, “Jai Ho” with The Pussycat Dolls.  Now Scherzinger has worked with Desi Hits Universal to create Desi remixes of her track, “Right There.”  We teamed up with Nicole and the Canadian trio Culture Shock to create what we call an Urban Desi remix of the track, and then we had popular Indian DJ Lloyd create a Bollywood remix of the track.   The world dug these remixes, and in keeping with his love of all things Desi, Perez Hilton also reported on Culture Shock’s remix of the track recently.

We Are Bringing a Bollywood Diva West!

Bollywood is bigger then ever and with all the buzz about these Bollywood babes we discovered one that we want to serenade American audiences.   Her name is Priyanka Chopra and she is one of the most famous actresses in the powerful Indian entertainment industry known as Bollywood.  She has just been signed to Desi Hits! Universal and is on her way to start working on her American music career.   Chopra even had a chance to meet with Lady Gaga this year at Gaga’s MSG concert and this is what mother monster had to say about her. “She’s beautiful. We spent a lot of time together. She’s so very sweet and gorgeous. She’s so kind, and she came to my show, and I was very honored that she came to see it.”  Watch out for Priyanka!

Glamify your Fall with these stylish new pieces from Talbots!