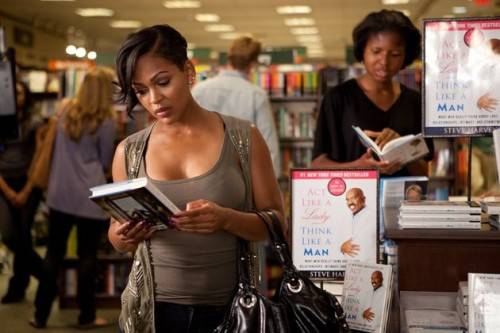 (TGATP is sorry to roll this out a bit late.  In the process of a major move, so a bit backed up.)

When Steve Harvey first wrote the book, “Act Like A Lady, Think Like a Man” the publisher sent me a PDF version.  At first, I balked at  the broad generalizations.  But once I started reading it, I was emitting frequent “hmmms”.  Single after a string of grand affairs that ended with the guy either fearing commitment or marrying the next one after me, I could definitely relate.  I really saw myself in the women with standards set too high AND alternatively in the ones who were not demanding enough.  And the “holding the cookie” thing just cracked me up.  But there was always one glaring and intrinsic limitation to  the book.  By its very design, it had a limited shelf life.  Because with Steve Harvey EVERYWHERE talking about it, it would be impossible for us, women, to employ his advice!  Since guys watched Oprah and all the outlets he was pushing the book on, guys would know what was up.  The tactics were rendered moot after the very first promotional appearance!  It would be like trying to win at poker and showing your opponent all your cards.

Thus this is a rare case where the movie is better than the book and the perfect resting ground for this material.  After an infomercial-like first couple of minutes, the film takes off with great comedic results and delivers Steve’s message to women and men alike.   If you strip away all the stereotypes and one size fits all generalizations, he is basically saying that we need a return to more traditional respect based values in our relationships.  Steve is saying “yes give up some cookie”.  But give it up to men that have earned it and are gonna stay round for another zillion batches!  After years of dating the wrong ones, I heartily agree.

The ensemble cast is perfect especially Kevin Hart as the recently and not so happily divorced, Cedric.  Hart is a laugh a minute and Terrence Jenkins is almost too believable as a Mama’s boy.  Regina Hall is a standout on the women’s end, I felt like I knew her.  And I have always loved Meagan Good, who is beyond adorable here!  The one misstep in casting couples was the pairing of Gabriele Union‘s “Kristen” with Jerry Ferrara‘s “Jeremy”.  He was just too short for her and I didn’t buy them as a couple.  One of them needed to be re-cast.  Fortunately, the heat was brought by the delicious Michael Ealy and the always sizzling Taraji P. Henson as Dominic and Lauren.   They had so much chemistry that I wish they were a real couple.  I let out an audible “umph” at their first pairing!  And Taraji just always has a cat that ate the sexual canary look on her face.  She is smoulderingly hot and her character is totally relatable.  One thing though.  I really wish that we didn’t always have to see tons of tongue whenever it’s a Black couple kissing onscreen.  It’s way too much!  I know that Hollywood is still trying to play into the whole “Black folks are more animal in bed” stereotype.  But enough is an obvious ’nuff!

Think Like A Man is a perfect film for every combo – a great date night film, a fun girl’s night out flick, and even guys can go when they are chillin’ with their boys.  There are laughs and lessons abound!  And it’s wonderful to finally see another Black rom-com that is for everyone.  The last was “The Best Man” over 13 years ago.  Please Hollywood sir, can we have some more please?  Oh and girls, please do not try this at home.

No One Should Be Proud Of Proud Mary