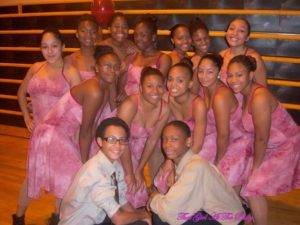 The US public educational system is a complete hot mess.  Many students graduate high school with no chance of entering college and barely equipped to compete in the global economy.  Thus, it was wonderful learn about the work of the Urban Assembly through attendance at their gala.  Held at the Martin Luther King High School on the Upper West Side, the 1st Annual Urban Assembly Homecoming Gala was uplifting and inspiring.  I met some of the students at the dinner and they were just wonderfully poised and full of youthful exuberance!   Dinner was tasty even though it was a summer menu served on a chilly fall evening. (I would use a different caterer next year.) Both Mayor Bloomberg and Joel Klein gave laudatory talks and received ovations.  In addition, the students from the Urban Assembly Performing Arts School performed for us.  Penguin Publishing added a nice touch to the evening by supplying classic books such as Jane Eyre, The Jungle, Pride and Prejudice, and A Midsummer Night Dream as the centerpieces and gifts for the evening.

The Urban Assembly is a “non-profit that creates and manages a community of New York City Public Schools dedicated to preparing students from under-resourced neighborhoods for success in four-year colleges.” Each school is organized around an educational and professional theme ranging from performing arts to law, government, and justice.  The schools are strategically placed in neighborhoods where the students would otherwise be forced to attend underperforming or failing schools.  The schools have a non-competitive admissions policy so the children are not screened to select high achievers.  The schools are greatly enriched by their partnerships with colleges and major universities and non-profit and private organizations.  While the average graduation rate for NYC students is 58% and the college acceptance rate only 38%; an astounding 85% of the Urban Assembly students graduate and 90% are accepted by colleges!  TGATP fully supports the Urban Assembly for its fantastic work on behalf of teens.