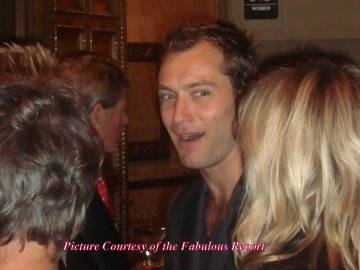 Thursday night was a mad crazy romp.  Started at the KMR 2nd Annual Girl’s Night Out at Bruno Jamais (25 East 81st b/tw 5th and Madison) which was fun and packed with exciting beauty products.   My favorite products were: the Honeycat Bath line, the G2 Organics reiki infused line of organic products, the beautifully scented Belli cream, and Kelo Cote which helps makes scars disappear.  (I stupidly fell on the sidewalk scraping my knee and leaving a scar last year, so I will be testing this product on it.) As a newbie to the whole exercise world, my very favorite thing was i-Pump Fitness Builder, the new exercise app for I-Phone and I-Pod Touch, which has over 500 workouts!  It provides access to the world’s largest exercise image/video library in the palm of you hand.  There are workouts that suit every environment from your gym to hotel room to your home or office.  In addition, you can customize your workouts to suit your own personal fitness goals!  In the words of Pump One co-founder Craig Sclossberg, Fitness Builder “is like having a personal trainer in your pocket.”  (Although TGATP readers will more likely tote it in their designer purses!) And contrary to that hot mess Spa Media gift bag episode from last week, Katherine Rothman made sure to greet her key media people and made sure we went home with the adorable “Make Love, Not Trash” gift bags loaded with the featured products! 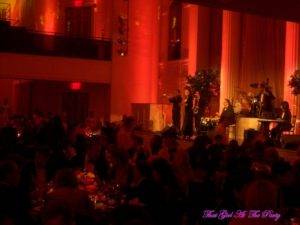 From KMR’s fab fete, I popped through the Hispanic Society of America Annual Gala. Unfortunately, they insinuated that I could cover the whole event but when I arrived they did not have me down for dinner.  So since I was starving, I only stayed to take a few quick shots before leaving for the Microsoft Open House Party, a few blocks away. 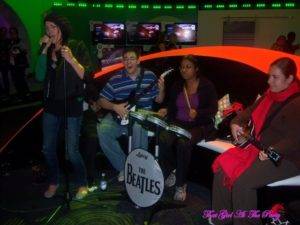 The Microsoft do was a blast with the new Beatles Rock Band game and a few other X-box games set up in a futuristic forest setting, complete with a treehouse.  In addition, AT&T was on hand with their latest phone and the latest Microsoft HD webcams were being given out as well.  I was too late to get mine, which are set to arrive by mail.  Purportedly, there were Zune products also being distributed earlier on.

From Microsoft, it was off to Gotham Hall for the opening night party for Jude Law’s Hamlet.  Jude was much shorter than I imagined and is rapidly balding from the sides, so not as hot as I had anticipated.  In addition, he committed the big celeb faux pas of having security around him INSIDE the party which is just a big ole’ NY party not!  We did get a brief word with him before he left and he was affable enough but even Brad Pitt, a far bigger draw, did not have security surrounding him inside the Time Traveler’s Wife party.  It’s just not done.  For the most part the assumption is that once the celeb is inside with the other invited guests that everyone will know how to act appropriately.  There are of course, those very rare occasions when someone, like suburbanite housewife Denise, get into a party.  I had to stop inviting her to bigger events as she didn’t know how to comport.  Annoyingly to both me and any attending celebs, she would become a raving fan, corner them, and then start jibber jabbering incessantly!   However, as most NY partygoers are used to being side-to-side with celebrities, such situations are one-in-a-million!   So note to Jude while you are staying in the City, leave the bodyguards outside!