Three weeks ago, I went on the one of the most enjoyable weekend trips I have ever taken.  Just an hour and a half from New York and 90 minutes from Montreal is the breathtakingly beautiful winter wonderland, Mont Tremblant.  Dating back to the 1930’s, the region boasts world class ski slopes and runs with 94 trails and 602 acres of ride area, one of the largest snowboard areas in Canada, top notch restaurants, luxury shopping, and a movie theatre that has first-run films in English and French,  all in a European village-type setting.

Here is a diary and observations from my stay:

DAY ONE:  FASTEN YOUR SEATBELTS!   IT’S GONNA BE A BUMPY RIDE.

The easiest way to get to Mont Tremblant is a quick Porter flight from Newark that flies direct.  Take the NJ Transit and the Air Train to Newark Airport.  It will save you a ton of money and is so quick and easy that there really is no reason to go any other way.  Unless, of course, you have a company limo.

When I arrived at the airport, I was surprised to find that the Porter plane taking us on our magical journey was a small propeller plane.  While it was posh, like a private jet, thank God I popped some Bonnie!  The flight was turbulent for the entire trip!  If you get at all motion sick, make sure to pop your motion sickness pills because you will definitely need them.  It was my first time on Bonnie, which left me weirded out and sparked a migraine, so I recommend you stick with Dramamine.

In a little over an hour, we arrived at the adorable Kwanis-Club reminiscent, Mont Tremblant airport.  Check in took just seconds and then we were whisked over the mountain and through the woods to our host hotel, the gorgeous Fairmont Tremblant (3045 Chemin de la Chapelle).

We lunched at Le Shack Resto Bar (3035, ch de la Chapelle) which boasts the best burgers in the region!  An added plus is that the restaurant has both non-alcoholic beers, as well as, interesting alcohol-free cocktails.  Happy to be sober but desperately need more drink options.  Thankfully, in Mont Tremblant there are plenty!.   The rooms are spacious and comfy with a friendly staff and loads of amenities including:  Wi-Fi in the rooms, a full breakfast, hot tubs, a gym, and a sauna.  The only addition I would add to the rooms is an iPod dock/clock, so that guests can have music during their stays.  But then, I think every hotel should have those!  I fell instantly in Love with Gracie, a yellow Lab, who serves as the hotel’s canine ambassador.   If you like to get your pet bonding on while on vacation, Gracie is available for walks.  Although I didn’t get to it on this visit, I definitely plan to take her for a stroll on my next one.

After lunch, it was off for a brisk sleigh ride through the snow covered countryside.  Ricard, our ebullient guide, wrapped us up in warm blankets then proceeded to regal us with jokes so corny they were hilarious, participatory music performances, and a dancing puppet.  It was a goofy good time and brought out the musician in all of us as we rocked out on kiddie tambourines, rattles, and spoons.

Following our sleigh ride, La Forge Bar and Grill (3041, chemin de la Chapelle) offered us a scrumputous dinner in a romantic setting.  The two-story restaurant has  two distinct ambiances – a downstairs bistro and and an upstairs steakhouse.  I suggest you opt for the steakhouse.  It’s cozy and romantic and the perfect way to end a day on the slopes.  Order the whopping 16 oz. Rib Eye, which we all agreed, was the best cut.  And if you love sweets, order a selection of  desserts, all of which are terrific.  The only miss was the onion soup appetizer, which I found to be way too oily.  Opt for a salad instead.  And make it a light lunch if you plan on dining at La Forge.  The combination of a burger lunch and then a steak dinner made me feel like I had packed on ten additional pounds! 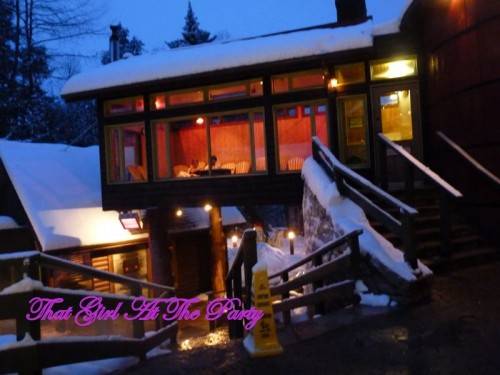 DAY TWO:  IN WHICH I GO TOE-TO-TOE WITH AN ANTI-GRAVITY CHAIR AND LOSE!

After a morning that included the choice of skiing, snowshoeing, snowboarding, cross country skiing, and ice climbing, we were whisked off to the luxurious Spa Le Scandinave (4280, Montee Ryan).  Nestled in deer populated snowy woods, there is simply no more relaxing way to spend a wintry day than at this lovely oasis.  In just one afternoon of alternating between the outdoor hot tubs, Finnish saunas, cold showers and the river I alleviated months of stress from my body.  Pure nirvana was achieved as I sat in the hot tub while tiny flakes of snow hit my face.  Jeff and Leaura, my fellow visiting journalists, bravely (or should I say crazily!) leapt into the icy waters.  But I stayed with the warmer options.  Just walking from hot tub to sauna provided enough exposure to the cold in my book! 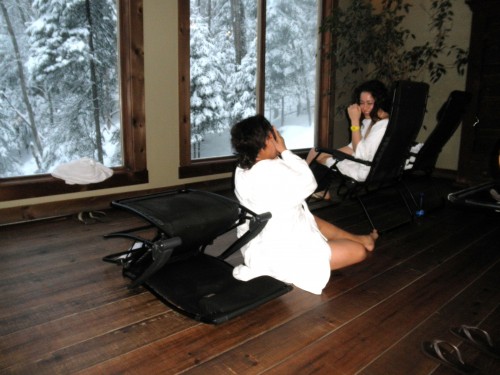 Do visit the relaxation lounge with the anti-gravity chairs.  But be careful getting out of them.  While everyone else was half-cocked in their chairs, mine went so far back that my feet were straight in the air.  This was euphorically relaxing, until I began to ponder just how exactly I was going to get OUT of the chair.  I rocked forward and nothing happened.  So I decided to try to curl up and come out the side of it.  Big mistake!  This left me sprawled out on the floor and everyone, most of all me, laughing hysterically when the chair collapsed underneath me.  I would suggest that the spa station a staff member in this room.  While I found the whole episode comedic, someone else could get hurt!

Our second night, dinner was served in the cozy Windigo Restaurant situated in our hotel.  Lobster with garlic butter was the appetizer followed by a smorgasbord of every imaginable food from the buffet.  My diet was shot but it was great food in a fun setting with great company!

DAY 3:  IN WHICH OUR DOGS THINK WE ARE CRAZY, A DOLL SPOOKS ME, AND WE FEAST LIKE ROMANS!

Dog sledding was the primary activity for our third and final day in Mont Tremblant.  I got cutely decked out in because I pictured myself being pushed over snowy terrain by hunky Canadian men.  Instead, when we arrived we were put to work harnessing the dogs to the sleds and instructed how to manage the sleds ourselves.  This was an unexpected turn of events.

My first dog was so wild he started running before they even got him strapped to a sled.  I was literally boot sledding with him until I finally reigned his crazy ass in!  Once the dogs were all assigned to their sleds, the instructor started running us through the dog sled driving paces.  Lean this way, then push this way, bend your knees, then walk alongside, then foot on a brake, …. I was lost in seconds!  I opted to ride and photograph rather than actually try to lead a pack of wild ass dogs through 6 feet of snow in 30 below weather! 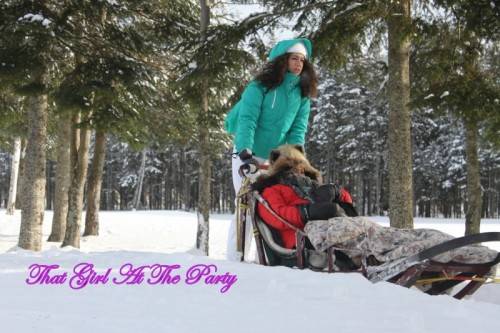 Le’Aura drove half the way and our dogs kept stopping!  We began yelling everything we could remember to say “Hut!”,” Mush!” even resorting to Speedy Gonzales’ “Andale!”   To which the dogs didn’t budge and instead responded with disinterested stares, resuming only when they felt like it.  Thank God, there wasn’t a breeze since one dog took a piss on each and every incline.  And the crazy people behind us obviously didn’t listen to the instructors.  Rather than stay 15 feet behind us, their dogs kept jumping onto our sleigh and mingling with our dogs!  The ride was both exhilirating and hilarious.  On the way back, my driver was a former dog sled professional who had raced in Alaska!  I highly reccommend that you visit the Expedition Wolf (9552 Route 117 sud. Rivere-Rouge) on your Mont Tremblant stay.  (Tip:  Make sure to bundle up and get both hand and toe warmers because it is bitterly cold.)

I spent the afternoon checking out some of the shops in Mont Tremblant village and happened upon some real quaint spots.  I love the Galerie Soutana (118 Chermin de Kandahar), which sells art and crafts from the indigineous communities of North and South America.  Having seen too many horror movies, I opted to skip the doll that initially caught my eye (see above).  I could envision her coming to life Trilogy-of-Terror”-style and chasing me round my Brooklyn apartment.  Since my crazy landlady is already horror enough for one home, I picked up a couple of good luck charms instead.  To warm up, I nipped into the Creme de la Creme (129 Kandahar), a delightful old-fashioned cookie shop that serves delectable baked goods and hot drinks.  And for anyone who has a raging sweet tooth like me, the Place Bonbon (La Tour des Voyageurs, 151 Cur Deslauriers) has your fix.  Or you can try a frozen maple pop served from the Cabane A Sucre de la Montagne (151, ch du Cure-Deslauriers). 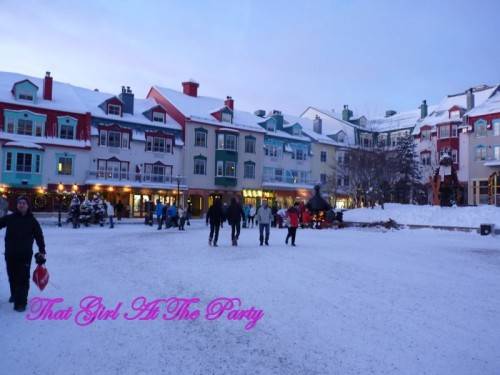 In the evenings at Mont Tremblant, the ski slope is transformed into a delightful tubing center.  I was transported back to my childhood as I went sailing down the hill in a giant inner tube.  While a lil’ scary at first, it is awesome good fun.  Just make sure to hold onto your straps!

Coco Pazzo (Promenade Deslauriers) served as the setting for our final dinner in Mont Tremblant and it was literally a case of the best being saved for last!   Situated in the heart of Mont Tremblant village, Coco Pazzo whips up the best Italian cusine I have had outside of Italy!  We were served a five course meal consisting of pasta, risotto, rabbit, salad, and more by culinary genius, Luigi.  Kudos to the bartender, who whipped up the most inventive non-alcoholic cocktails I have ever had!  Every mixologist needs to be this inventive!  No visit to Mont Tremblant would be complete without dining at Coco Pazzo.

I love Mont Tremblant and am so happy to have found such a wonderful new getaway with a Euro feel so close to New York.   Just writing this piece has made me what to go back!  It is perfect for every type of getaway.  Take your girlfriends for a gals only weekend, take your family for a family ski trip, and take your man for a romantic getaway –  whatever you do, just go!

YO1 Wellness Center Is An Ayurvedic Paradise