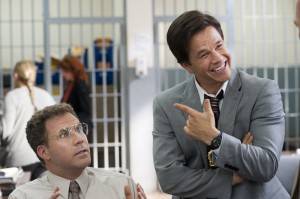 The Other Guys is the perfect date movie as you will laugh your ass off!  Reminiscent of the buddy cop films of the ’80s, it is the funniest film I have seen in a long time.  Prior to watching this film, I was not a big Will Ferrell fan and have always found his humor rather puerile.  But this is his best work to date!  As Detective Allen Gamble, a nerdy cop with a pimp side, Ferrell is comic genius and the film is a Ferrell fest!  Mark Wahlberg making his first turn in a comic lead, after a supporting role in “Date Night”,  is equally hilarious as his reluctant partner, the trigger happy, Terry Holz.  As Ferrell’s bombshell wife, Eva Mendes holds her comedic own.

The plot is simple.  Ferrell and Wahlberg are “the other guys” relegated to desk duty and living in the shadow of two heroic supercops played by Samuel Jackson and Dwayne Johnson (a.k.a. “The Rock”). When their colleagues meet an untimely (and hilarious!) end, they decide to step up to the plate and become NY’s new heroes.  Although the crime story gets a bit bogged down towards the end, I found it pretty hysterical throughout.  There were only a couple comic missteps, including a not-so funny scene with Walhberg confronting his ex at her ballet rehearsal.  This scene was over long, not funny, and didn’t really add to the plot, so it should’ve hit the proverbial cutting room floor.

It was also great to see a film set (and actually shot) in the greatest City in the world and the writers include tons of insider NYC jokes.  (I got a particular kick out of the riff on the proliferation of bogus online reporters that called to mind all the crashers/fake journalists from the”Examiner.com”!) In addition, the action scenes are first-rate, making the film a perfect action/comedy.  The end credits include a civics lesson, that I am not sure, had a proper place in a comedy.  Those of us that know the facts are already hip.  Those who don’t, will resent this invasion to their head-in-the-sand attitudes.  Plus, overpaid actors and above the line crew members, who are making millions, are hardly the ones to point to salary inequalities.  It was especially  hypocritical since there were glaring examples of inequities in their own crew!   Take the craft service workers.  The company that worked crafty on this film is notorious for undercutting its competitors by hiring recent immigrants, who work for a third of the standard rate!  But it was great to hear my dear friends Rage Against The Machine wail out their rendition of Bob Dylan‘s “Maggies’s Farm” as we read them.