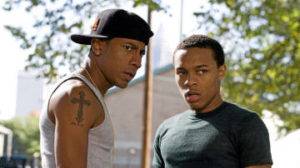 The Lottery Ticket is a barrel of laughs!  Produced by Ice Cube, and set in the Atlanta projects, the story centers around Kevin Carson, played by Bow Wow, who lives with his grandmother the always divine Loretta Devine.  When Kevin wins the state’s largest lottery, he faces the the dilemma of having to survive through three days over the July 4th holiday, before redeeming the ticket.  This, of course, leads to all manner of comic bedlam when the whole neighborhood finds out about his win.  In the vein of Cube’s legendary “Friday“ franchise, the plot is an excellent premise loaded with comic potential that is more than fulfilled by Abdul Williams’ laugh-filled  script.  From ghetto hoochies, who want to have his baby to hoodlums that want to steal the ticket, Kevin is on a never-ending comical and perilous survival course.

Bow Wow has grown up into an appealing lead and totally carried the film.  Playing his sidekick and best friend, Brandon T. Jackson is a street smart, wise-ass and the ideal guy to have Kevin’s back.   I absolutely loved Naturi Naughton, as “Stacey”, the heart of gold/round the way girl who fancies Kevin. As “Nikki Swayze” the hot goldiggin’ hoochie vying for Kevin’s affections for very different reasons, Teairra Mari is pitch perfect.  Her character initially makes you laugh, but on reflection makes you kinda sad, when you think about how many “Nikki Swayzes” there are in the world.  Mike Epps delivers a gut busting turn as a preacher with plans of his own for Kevin’s winnings that was my favorite part of the whole movie.  All of the casting was excellent with Ice Cube, as an agoraphobic former boxer and wise neighbor, Terry Crews (best known as the cheapskate Dad on “Everybody Hates Chris”) as a lame bodyguard, Keith David, as a major neighborhood dealer, and The Wire’s Gbenga Akinnagbe, as the ex-con, who is terrorizing Kevin.

The Lottery Ticket is both a great family film and a fun date movie as everyone will laugh their pants off.  In addition, although set in the projects, the film has a universal theme about greed and true friendship that should resonate with all moviegoers, and the message is delivered without a preachy bang you over the head feel.