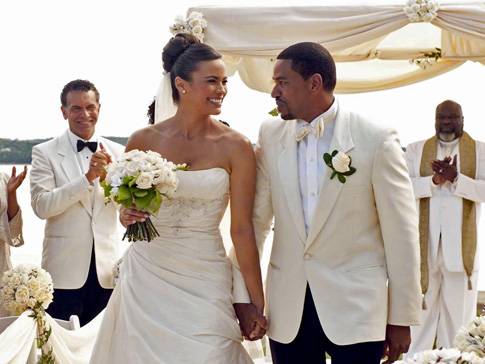 Produced by T.D. Jakes and Tracy Edmonds, Jumping The Broom is a fun romantic comedy that will put a smile on your face and warm your heart.  I was pleasantly surprised as I was expecting the usual stereotypes.  However, the film had some unexpected surprises.  The premise is simple.  Sabrina Watson (Paula Patton) and Jason Taylor (Laz Alonso) meet cute and fall instantly in Love.  Six months later, Sabrina is bound a job in China.  But even worse, she made a promise to God that she would save her remaining cookies for marriage!   So natch, Jason proposes pretty quickly.  Enter the two vastly divergent families – the filthy rich Watsons and the working class Taylors – who are forced to face their many class and family issues by with their children’s coupling.   Patton and Alonso are just pasable as the besotted couple and Loretta Devine is her usual head rollin’, ghetto self, as Jason’s bitter and over connected Mother.  The film really belongs to the elegant Angela Bassett and Brian Stokes Mitchell as the “mother and father” of the bride and Valarie Petitford as the bride’s, wacky yet tragic, Aunt Geneva.

Jumping the Broom is both a perfect date night film and a great movie to see with your girls.  I found the story quite engaging, as very rarely do we see affluent African-Americans on screen.  In addition, the issues of class, within the Black community, are almost never addressed.  The beauty of the Watson’s estate on Martha’s Vineyard was so  breathtaking that it made me wish I was actually attending the wedding.  And reminiscent of “Mamma Mia”, there are other cute couplings including the Watson’s relationship (I want a husband like Stokes-Mitchell!), a budding romance between the wedding chef played by Gary Dourdan and the maid of honor Meagan Good, and the cute cougar flirtation between Bow Wow and Tasha Smith.  One character faux pas was Julie Bowen as Amy, an irritatingly racist and disrespectful wedding planner.  It is unbelievable that Bassett’s character would put up with her.  Then there is the playa hating cousin, played by DeRay Davis, who is set on destroying Jason’s relationship and is also just annoying.  And finally, Devine’s life changing actions on Sabrina and Jason’s wedding day are so odious and nasty, that a real Bride would never forgive her.  I would rather have seen her antics be more comedic a la “Monster-In-Law” and less downright dirty and outright mean. In romantic comedies, every character needs to be eccentric but likable.  They can have irritating traits, but ultimately, should be people the audience would like to know.  None of these three would be folks I would have around.

Despite these character missteps, I liked Jumping the Broom a lot.  Because it is produced by T.D. Jakes, there will inevitably be Tyler Perry comparisons.  But while it is targeting the same audience, the filmmakers are like apples and oranges and Jumping the Broom is far less Amos and Andy than most of Perry’s works.