On Your Screen, TGATP Art and Culture, TGATP Screen
August 17, 2012
by That Girl At the Party
0 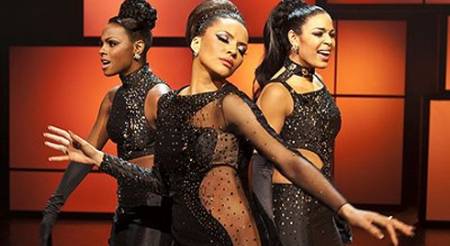 I was a child when the original “Sparkle” came out.  I remember it was one of the first films I got to see independent of my parents on an outing with my girlfriends, a rainbow coalition consisting of one Asian girl, one African-American, and two White girls, who were cousins.  For us, Black girls especially, the film marked such an important era representing the first time that a female character – Sparkle played by Irene Cara – was not a hooker or some other miscreant.  While there were certainly Black stereotypes at the foundation of the story – a Black single Mom, a druggy sister, the abusive and/or absent Black man – the story was different and far more positive than the normal ’70’s Black fare.

I remember how delighted the wonderful Joel Schumacher was when I begged for a remake while working in the office of his Deniro/Hoffman film “Flawless.”  He was so happy that someone remembered Sparkle and I am so happy that he is supportive of this remake.  Like the reboot of “Total Recall” that I just reviewed,“Sparkle” is splashier and better, in many ways, than its predecessor.

First off, there is the legendary Whitney Houston, in her swan song and finest screen role.  It pains me to my core that she left us just when her acting chops had finally truly emerged.  She brings stark realism and heart to her role as Emma, a former wild child and music biz wannabe, with three very special and different daughters.  Having almost been ruined by bright lights and bad men, she raises her girls with an iron, Bible-bashing fist.  But Life being what it is, things transpire that are out of her control.  It’s very hard to watch and I spent much of Whitney’s scene either weeping silently or with a lump in my throat.  It was particularly moving to experience Whitney in top form performing the gospel standard “Eye On the Sparrow,” after which my audience burst into spontaneous applause.  I can imagine that many of the conversations and arguments she has in the movie with her wildest daughter, were had by Whitney and her own Mom.  When she speaks the now eerily prescient line ,”Is my life not enough of a cautionary tale for you?”, it’s almost as if her subconscious was warning her one last time.  You just wish that Whitney had listened to the lines, she was saying as the motherly Emma, herself.

All of the casting is excellent especially that of the three sisters.  Jordin Sparks, in her debut screen role, is a revelation and brings a vocal talent to the role that Irene Cara lacked in the original.  Tika Sumpter is a scene stealer as the level-headed sister “Dolores” and Carmen Ejogo, is electrifying, evoking Beyonce in “Dreamgirls” in her star making turn as the wild child with heart, “Sister”. The male leads are equally well-cast with Derek Luke as “Stix” and Omari Hardwick as “Levi” both put in good turns.  But it is Mike Epps as “Satin” who steals the male show.  His ever present malevolence is Oscar-worthy and so realistic that I hope he is already happily married, ’cause women will be afraid to date him.

As with the original, the soundtrack is key.  The popular Curtis Mayfield numbers we loved in the early film including “Something He Can Feel” and “Hooked On Your Love “ are retained with new tracks from R. Kelly.  (I remember singing along to Aretha Franklin‘s version of “Something He Can Feel” long before I even knew what that something, you can give a guy to feel, was.)

Director Salim Akil and his awesome production team, do a bang-up job of evoking the period and you truly feel thrust into the late ‘6o’s for a couple of hours.  There are only two changes I would have made in this otherwise great film.  First, the dress in the final scene.  It’s far too revealing and low cut and is not in keeping with the character, who gifts it to Sparkle.  A dress – yes.  A titty poppin’, to the navel plungin’ one – no.  I’m surprised that the producer, the esteemed Reverend T.D. Jakes, allowed that in.  And finally, the dedication of the movie to Whitney should’ve appeared either at the beginning of the film or at least at the beginning of the rolling of the credits.  Most of the audience was gone by the time it appeared.  I would’ve had that message at the very beginning over a black screen.

Of Apple vs Samsung, Cheating Starlets, and Abusive Basketball Husbands!

Win a Spa Day and Private Sparkle Screening for 10 from Black Opal!