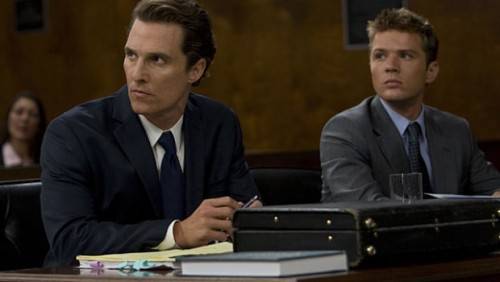 The Lincoln Lawyer is the first great film of the year and the best courtroom thriller since Presumed Innocent! Based on the bestseller by Michael Connelly and directed by Brad Furman, this film snaps, crackles, and pops!  Matthew McConaughey is in sizzling form as Mitch Haller, a swift talkin’ LA attorney, who runs his practice from the back of his chauffeur driven Lincoln.  His clients are an assortment of the more colorful elements of society, including bikers and drug addicted prostitutes, until he is hired by rich playboy Louis Roulet (Ryan Phillipe) to defend him on a rape charge.  Assisted by his PI sidekick Frank, played by the always great William Macy, Haller begins to unveil the real story behind the rape.

This is McConaughey at the top of his game!   Street smart with a conscience (and that unforgettable Paul Newman-esgue swagger), McConaughey turns Haller into one of the slickest yet compassionate lawyers ever to appear on screen. He’s a hustler with a heart. Marisa Tomei gives a strong performance as Haller’s ex-wife, who inexplicably chooses to raise their daughter alone and Trace Adkins turns in a fun cameo as the head of a biker gang.  In fact, everyone in the film brought their acting A-game including Shea Whigham, as a jailhouse snitch and Laurence Mason (who resembles Bobby Brown) as Heller’s driver.  The only misstep was the casting of yet another African-American as the judge, which gives the false impression that there are tons of Black judges presiding over criminal cases in the US.  Honestly, if there were as many Black judges on the bench as Hollywood would have viewers believe, the US prison population would not be 75% African-American!

With a story full of twists and turns and great acting, inside and out of the courtroom, this is a definite must-see for anyone that loves thrillers.