Entertainment, On Your Screen
September 8, 2022
by That Girl At the Party
0 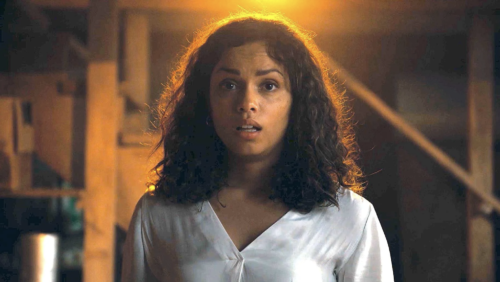 Scary but hilarious, Barbarian is the movie that Sam Raimi forgot that he needed to make. The plot centers around Tess, who has to travel to Detroit for a job interview and rents an AirBnB. At the same time, the owner of the rental, an obnoxious actor in the midst of being canceled over the #MeToo accusations of a co-star on his recent pilot, is coming down from L.A to sell the property.

Like Jordan Peele did with his debut “Get Out”, writer/director Zach Cregger (best known as a member of the sketch comedy troupe the Whitest Kids U’ Know) has made an interesting mashup of horror and comedy. (I call these films “horroredies.”) Unlike Peele though, Creeger’s film touches on some societal issues but doesn’t linger and is not interested in being anything but what we horror fans love best — unforgettable scares. In other words, no one will be doing YouTube videos explaining hidden meanings. Instead, Barbarian offers one very basic scary concept – strange rumblings in the basement. Modernizing the basic concept of something creepy in the basement to something creepy in the basement of an AirBnB creates a lasting, new scare for audiences. It’s equivalent to that little twinge of fear you get every time you shower at a hotel after seeing “Psycho”.  I saw it right before I had to rent my first AirBnB and was totally creeped out on my vacay. The woman in the other bedroom of the apartment kept slamming her dern bathroom and bedroom door in the middle of the night. So I locked myself in and didn’t come out. On my last night in LA, I was in the rental alone, which was equally spooky!

The casting is perfect. I literally can’t see anyone better than Justin Long as AJ, the slimy, LA actor. Georgina Campbell rocks and kicks ass as Tess.

To fully engage, there are a couple of gaping plot holes that you have to overcome. For example, no woman —particularly no Black woman — would enter an AirBnB that was occupied by a male stranger, when they were supposed to be staying in it alone. Secondly, no one would come back to the house after the first night of strange goings-on. Thirdly, no one, male or female, would go back after escaping. I was literally yelling, “Gurl, come on!” at the screen, which set all the other critics in attendance, off in peels of laughter. But then all classic horror movies ask us to suspend our logical beliefs. There are also some really graphic and icky moments that you won’t be able to unsee so prepare to be totally grossed-out,

Plot holes be damned, Barbarian is a raucous, scary good time and an instant cult classic. See it!