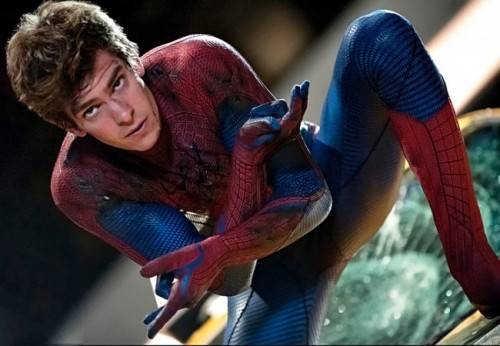 No one was a bigger naysayer going in than me on this one.  I had personal reasons since I worked for Sam Raimi on a film and really dig him.  He was the nicest, most gracious man that you could ever be blessed to spend 80 Hollywood hours a week with!  Just a mad cool guy.  And for many years after, I kept in touch with Grant Curtis, his assistant on that film, who worked his way up to being an Executive Producer on the latter two Raimi Spiderman films.  So when I first heard that they were launching another Spiderman franchise, with a different director and another star, just five years after the Raimi version ended, I wasn’t thrilled.  I mean there are dozens of other Marvel characters that haven’t had proper film treatment.  Like, how awesome would a Black Widow series be!

But I have to say, I didn’t just like this Spiderman, I REALLY liked it!  It is a completely different take on it that kept it fresh and new.
Andrew Garfield is PERFECT giving the role a more moody Emo feel than Macguire.  And the film itself is less camp and more gritty.

With the relationship between Spidey and Gwen at the center of the story, it was vital to find the right gal for our hero.  And Emma Stone is perfect!  The chemistry between Garfield and Stone jumps off the screen, particularly in the make-out scenes, that are tailor made to get the tween and teen girls’ hormones raging.  Like Pitt and Jolie, you can fully understand why these two continued their canoodling off-screen.  Sally Field and Martin Sheen, as Parker’s Aunt and Uncle ring true and Rhys Ifans as Curtis Connors, the tragic villain is fantastic.  Denis Leary rounds out the casts as Gwen’s cool cop Dad.

I was very impressed with the Nolan-esque vibe that director Marc Webb brought to the project.  There are some great fight scenes and tons of action.  In addition, it is wonderful to see 3D put to good use.  We literally get to jump from building to building with Spiderman, which is breathtaking in that roller coaster type way.  My only issue with the film is that at 136 minutes, it took a tad bit too long to get to the inevitable conclusion.  Definitely see this one on 3D IMAX.

4th of July Wine and Food Pairings from BevMo!