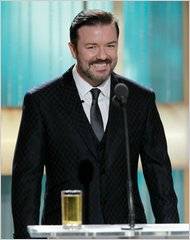 The Golden Globes choice of Ricky Gervais as host was seemingly a mistake.  He was just too caustic and mean spirited and there were far too many truly awkward moments.  I wish that there had been more camera pans of the audience after his over the top barbs!   Halfway through the show, he disappeared for a spell which reportedly was due to the right talkin’ to that producers were giving him backstage.  You can be sure he won’t be coming back next year.  As for his puzzling closing statement, “Thank God, I am an atheist”, I suggest Ricky get religion real quick and drop to his knees to pray for his career!  After last night, it is clearly on the line.  If you missed the opening monologue, here it is so you can judge for yourself:

This will also be another year of glaring omissions and bad choices on the part of the Globes!  In the actress category, Kimberly Elise‘s performance in “For Colored Girls” was the most riveting and gut wrenching performance of the year!  It was a GLARING snub that she was not at least nominated, especially a year after all the praise was heaped on Monique and that dreadful pile of crap called “Precious”!

In addition, Christopher Nolan was straight out ROBBED in the Director category!  While “the Social Network” was a great film and a terrific script, Inception was a far more magnificent feat in terms of directing.  Inception also should have won the score category with voters just giving it to Reznor because he is Reznor.  Hans Zimmer’s driving score was much more memorable.

Robert Downey, Jr. was funnier than Ricky!  I know I am not alone in saying that I would definitely sleep with him to make it as an actress!  Hell, I would sleep with him without it being a career building move!

In a “Stars, they are just like us” moment, I loved when Angelina Jolie was caught on camera applying lipgloss at her table.

As well as ask “who” they are wearing, red carpet hosts should ask the stars “who styled” them.  Stylists can make or break a carpet appearance!

What fun to be tweeting with the marvelous Jane Fonda!  Hope she got a snack as she tweeted that she was starving!

Bravo to Hollywood this year as there were some truly elegant and memorable fashion hits. However, there were as usual some real misses as well! Here are the TGATP best and worst dressed picks:

Olivia Wilde in Marchesa – Olivia always gets it right and looked fantastic in her chocolate. sparkling, confection of a dress with Christian Loboutin shoes.

Emma Stone in Calvin Klein Collection – A definite A+, Emma was gorgeous in coral and is stunning as a Blonde!

Jane Krakowski in Badgley Mischka– Best dressed pregnant gal!  Wish Natalie Portman had taken a page out of her book and let the hair flow.

Mila Kunis in Vera Wang – One-shoulder also in emerald green with a lovely undo that showed off those remarkable eyes.

Jake Gyllenhaal – So gorgeous!  I’m sorry Reese, I know you are engaged now and your guy looks ok, but what were you thinking to let this one get away?

And TGATP BFF/Model/Actress and all around great gal Molly Sims, who said that she was “going for a Bardot look” was a vision in a Marchesa Mini accessorized with her own Grayce by Molly Sims jewelry on the carpet at the InStyle and Warner Brothers after party.

Nicole Kidman in Prada – Nicole please, please, please, stop with the Botox.  Her face is becoming unrecognizable!  And white on white on the red carpet is just boring.  Re-hire your old stylist Nicole!  You used to be the one to watch!

Heidi Klum in Marc Jacobs – Hair and makeup was so dreadful that I didn’t recognize her at first! Come on Heidi!  There is simply no excuse for these red carper faux pas!  You are a top model with access to the best fashion has to offer!  Why do you keep showing up looking a hot mess??

Julianne Moore in Lanvin – Hot pink mess with dreadful hair that looked like she was going to the gym or for a facial!

Anne Hathaway in Armani Prive – Great hair but looked like a big robot with those ridiculous shoulder pads.

Sandra Bullock in Jenny Packman – Worst hair of the night!  Big bang action hid her beautiful eyes and hair was frizzy in the back when she stopped on the carpet.  Dress looked like a lace tablecloth.

Christina Aquilera in Zuhair Murad– Looked like she as channeling Mae West.  I know the movie was called “Burlesque” but did she really have to dress like a stripper?  Tits looked ready to pop out if she breathed too hard!

Helena Botham Carter in Vivienne Westwood – It is redundant to even list Helena, since she has always rejected fashion and seems to revel in being a freak.  Dress actually not bad for her but hair looked like she was wrestling with rats in a dumpster!

Tilda Swinton in Jill Sander – Just like Helena, a weirdo badly dressed Brit, and another one that seems to aim for the worst dressed list!

Jennifer Love Hewitt in Romona Keveza- Hated this!  Made her look both fat and ridiculous.  Dress was like a table napkin and updo too severe.

Kelly Osbourne in Zac Posen – Dreadful geometric one-shoulder number made her look like a linebacker in a dress!  Though newly svelte, Kelly had sloped shoulders so she needs to steer away from drawing attention to them.  And hair is too boyish now.

January Jones in Versace – Though the hair was flawless, the dress was just too much with way too much flesh showing.  Reminded me of a fire-eating costume.

Christian Bale – Get a hair cut, dude!  He looked like a bum!

Not the best but not the worst:

Angelina Jolie in Atelier Versace – Too subdued for Angelina.  We want to see her really pull out the glamour.

Scarlett Johansson in Elie Saab – Lovely Dress and hair pin but the updo resembled the Bride of Frankenstein.

Halle Berry in Nina Ricci – Loved the top half hated the bottom.  Looked like lingerie and always hate dueling lengths.

Helen Mirren – Would love to see Helen in something other than this style of dress.  But that 1.6 million Cartier necklace was STUNNING!

Catherine Zeta-Jones (in Monique Lhullier) and Michael Douglas –  The obvious love they feel for each other is so wonderful to see.

Blair Underwood and stunning wife, Desiree –  The way Black women are largely ignored in Hollywood (witness this year’s snub of the acting tour de force that was “For Colored Girls”) and by successful Brothers (Tiger Woods, Charles Barkley, the Old Spice guy, Ahmad Rashad, Bryant Gumbel, etc..) thank God that hottie Blair has a hot Sista for a wife!

Robert Downey Jr. and his adorable wife, Susan – While I didn’t love his suit, she looked amazing and he’s so hot!

Epilogue:  Just watched “Entertainment Tonight” and Steven Cojocaru has definitely lost the fashion plot!  He named Halle Berry and Nicole Kidman as the best dressed!  Is he now in need of a fashion sense transplant?