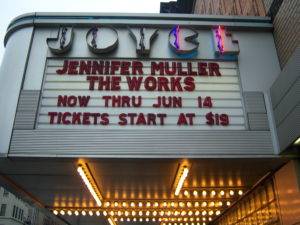 The 35 anniversary of Jennifer Muller/The Works was celebrated with an opening night gala recognizing Dancers Responding to AIDS, held at the Joyce Theatre, and was the highlight of my event week!  Ms. Muller’s choreography is a celebration of Life itself with vital and inspiring dance works that illuminate and uplift the spirit.  The night of the gala three dances were performed including the gorgeous Tub, originally debuted in 1973.  A delicate and sensuous dance focused around a tub of water on a beautifully lit stage, Tub is danced wet and symbolizes the emotional significance of water and cleansing.  The second dance was the thought provoking and emotionally wrenching, Bench, which literally brought me to tears.  Inspired by Al Gore’s Inconvenient Truth and incorporating the seven deadly sins, this heart-wrenching dance evokes the negative human behaviors that are leading to the destruction of the Earth.  The dance is accompanied by a large video projection of often disturbing, sometimes beautiful images of our deteriorating planet.  Capping the program was the lively and colorful Momentum, which is a dance discourse on movement and action set to a techno soundtrack.

Each dance was followed by an intermission during which we were entertained by an extremely boisterous fellow guest, who loudly emitted a really annoying laugh, to everyone he encountered.  What made this really hilarious was that he was laughing, not at things that other people said to him, but was instead guffawing at his own inane comments.  At one point a young woman with a new baby walked up and he let out his bellow and then shushed his SELF!  The wonderful woman next to me cracked me up when upon hearing his roar for the umpteenth time, she simply stated, “Guess someone had wine at intermission,” which sent me into my own fits of laughter! 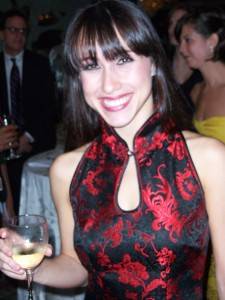 Following the program, we were happily shuttled by luxury bus to Tavern On the Green for the dinner reception.  I was so thrilled and blessed to meet the wonderful Ms. Muller herself and tell her just how beautiful and moving her work is.  A Yonkers born gal, Jennifer is an incredible and prolific Spirit who has created over 100 works.  She has danced since she was 3, and been creating dances since she was just 7 years old!  In 2003, she was chosen as one of only 30 artists in six disciplines, along with Placido Domingo, Toyo Ito, and Sydney Pollack, as a Founding Member of the World Arts Council.   It was a rare honor to meet one so talented, yet so wonderfully down to earth, and I look forward to following her future performances. 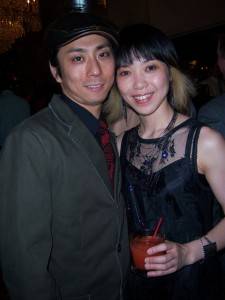 Also, met the hilarious and gorgeous Rosie Fiedelman, who is a member of both Jennifer’s company and the cast of “In the Heights.” We had a ripe old time discussing HAIR and my quest to see Will Swenson’s appendage during the nude scene.  She shared my pain as she too has yet to see it.  But she really cracked me up when she said that in her neck craning to see Will’s package her eyes trained upon Bryce Ryness, who plays Wolf’s glory and it was purportedly a real gift from God!  Note to self, forget Will’s check out Bryce’s!  (Not to be stuck on appendages but it IS a full nude scene so one’s mind does sorta go there!)  I want Rosie to be my new BFF!

All of the dancers and the people working with the Company were wonderful to hang with!  (I spied what appeared to be three cute couples in the troupe.)  I was delighted to chat with Leda Meredith, who danced TUB in it’s first incarnation, Pascal Rekoert, a stand out in the current troupe, and Violeta, a lovely Mexican student with the company.  In addition, Barbara Massey was a gracious and wonderful hostess.  It was a perfect evening out! 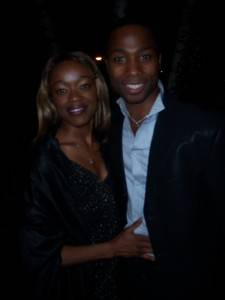