(This is a Level 3 post. Review tickets to the film or performance were provided to the blogger free of charge.)

Longtime readers of That Girl At The Party know that Jennifer Muller/The Works are one of very favorite dance troupes. Thus it was a great honor to attend both this year’s gala and Jennifer’s annual Women/Create! Festival at NY Live Arts. A celebration of female choreographers, this year’s Women Create featured works from Muller and three other titans of dance.

Jennifer’s world premiere piece A Theory of Color was a riveting exploration of how colors influence our emotions. A Theory of Color creates its impact by an unusual treatment of the performing space. The innovative lighting generates a uniquely illuminated stage, saturating the space to such a degree that all action is immersed in an intense color field.

Moving through a selected array –   a slash of red / a lake of blue / the majesty of purple / a grassland of green / a desert of yellow – the piece investigates the unique attributes and power of each color to affect the eye, psyche and mind. As each section unfolds, the flooded stage – drenched by the intensity of a single color – transforms motion and personality. This produces unusual and vastly different sets of movement characteristics. The action varies from harsh, elongated, spectral elegance to boneless kelp undulation, from twisting ivy-like growth to sun baked arid expansion.

The symbolism of each color is further elaborated by fragments of sentences and disjointed word groups voiced in taped layers over alternating sequential atmospheres – propulsive music or immersive blankets of sound. The piece is enhanced by the use of assorted items – reflective cubes – that influence height and area division creating more diverse stage environments.

Above all, The Theory of Color aims to offer the viewer a transformed perspective and heightened  awareness of the myriad tints and hues, the countless vibrant chromatic shades that exist in nature that can can delight the eye, affect the senses and enrich the experience of living in a world surrounded by an amazement of vivid color.

While I adore all of her performers, the stand-outs in this piece were Sonja Chung and Shiho Tanaka, who both light up every dance stage.  Issac Kerr was also amazing and is a rising dance star to watch. And it is always a joy to see Muller veterans and life partners, Seiko Fujita and Gen Hashimoto dance in any of Jennifer’s moving works. 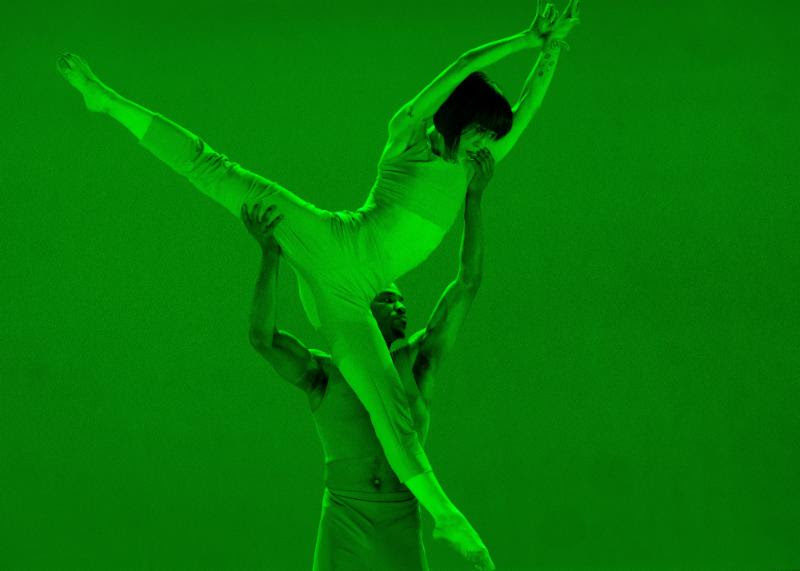 Jennifer Muller/The Works, celebrating its 43rd Anniversary, has electrified world audiences with its passionate work and superb dancers in 39 countries on four continents, 30 States in the USA and produced 26 NYC Seasons at City Center, the Joyce, Cedar Lake and New York Live Arts, among others.  JMTW has performed at major theaters and festivals worldwide, spanning hemispheres from Buenos Aires to Montreal and circumnavigating the globe from Shanghai to Moscow, with performances in Madrid, Rio de Janeiro, Bangkok, Tel Aviv, Rome and Amsterdam to name a few.  In 2017, appearances included Harbin, Tianjin and Beijing’s National Centre for the Performing Arts.

A byword for diversity since its inception, JMTW performs work that celebrates the human spirit with the belief that dance can promote cross-cultural understanding and act as a catalyst for positive change.  JMTW presents exhilarating dances that showcase emotional authenticity and social consciousness.  In the US, JMTW has appeared in venues such as Lincoln and Kennedy Centers, Jacob’s Pillow, Alice Tully Hall, Jacob Javits Center, the United Nations, Kaatsbaan International Dance Center and St. Louis’ Spring to Dance Festival among many others.  In New York City, festivals include Bryant and Battery Park, Hudson Valley, Fire Island, Summer in the Square and Central Park Summerstage.

How to Enjoy a Romantic Weekend Getaway in the Catskills