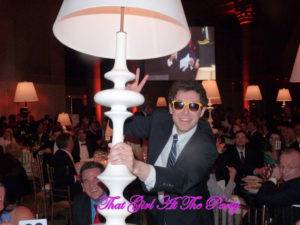 There is simply no organization, more dear to TGATP‘s heart, than the Make-A-Wish Foundation.  From a sweet sixteen party for Jeanette, to a trip to Japan to visit a friend for Gabriela, to meeting the cast of West Side Story for Elijah, to a trip to the Summer Olympics in China for Jeffers, the Make-A-Wish Foundation grants wishes both large and small to children with life-threatening illnesses.  I was very honored to be invited to their annual gala at Cipriani Wall and moved to tears by the wonderful stories that were told throughout the evening.

The man of the hour was Stewart Rahr, who keeps a picture of every child whose wish he has granted on his desk, right along side his family portraits.  Stewart’s commitment to the Make A Wish Foundation is exemplary.  He has made a wish come true every month for the past six years and has, to date, donated $2.3 million of his own funds to the charity!  At the gala, Stewart agreed to match any person’s donation up to $1 million dollars.  In addition to his invaluable contributions to Make A Wish, he is also involved with City Meals-on-Wheels, the Robin Hood Foundation, Columbia University Medical Center, the Leukemia and Lymphoma Society, and the Alzheimer’s Association.  Stewart Rahr is a true hero and a role model to anyone who wants to give back in a real and significant way.  In terms of philanthropy, he does not just talk the righteous talk; he walks the very generous walk. 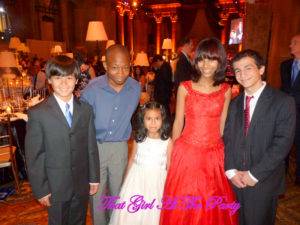 The evening was a smashing success with Stewart rallying the crowd to make major donations!  Throughout the auction, the guests lit the lamps at their tables to mark their contributions, which was a fun and novel touch.  After the dinner and auction, the guests, including many of the children and their families, danced well into the night to the sounds of the Marianne Bennett Orchestra, the best party band currently on the scene.  Covering everything from Michael Jackson to Lady Gaga, they performed an eclectic blend of old school and new dance tracks keeping the entire crowd on their feet song after song.

About the Make A Wish Foundation

The Make-A-Wish Foundation grants the wishes of children with life-threatening medical conditions to provide the children and their families with hope, strength, and joy.  Founded in 1980, it is the largest wish-granting organization in the world with 65 chapters in the US and its territories and 33 international affiliates spanning five continents.

The Metro New York Chapter is one of the busiest in the country and has granted more than 8,000 wishes since its founding.  In 2009, the organization touched the lives of 766 wish children and their families by granting 510 wishes and facilitating 256 wish assists for children who reside in other areas but whose wishes took place in NY.

For more information on how you can donate to this outstanding cause, go to:  http://www.wish.org/

Exclusive: Lady Gaga Goes to India and You Can Join Her!