From unfriendly outside PR staff at their editor event to low stock to website crashes, the Lilly Pulitzer for Target rollout was a perfect example of how NOT to do a designer collaboration and offers retailers, including Target, tons of valuable lessons for future initiatives.  Here are the most glaring mistakes and how to fix them from the knowledgable shopper point of view.

1.  Not knowing the Target consumer’s taste

Some of the designer lines, like Phillip Lim and Jason Wu, were more suited to avid fashionistas. However, Lilly Pulitzer is such an iconic and classic brand that EVERY woman can wear her clothes.  In addition, the lovely prints are also perfect for most homes.  It was a major faux pas to underestimate the appeal and make this a “limited edition”.  A better idea would have been to license the Lilly name for an ongoing collaboration.

Enough already with these website crashes! Thiis should never have occured again after the Missoni debacle of 2011.  It’s years later.  Hire a competent firm to handle your website already.  There was simply zero excuse to have this many pissed off online customers!

“We don’t give a specific time and it’s not to be cute or coy,” said spokesperson Joshua Thomas. “It’s because the items roll out separately, and the pieces become available one by one.” What??

3.  Not properly stocking the stores.

This is a direct by-product of not knowing the Target customer and thus, being afraid to manufacture too much stock.  Had the executives known their consumer, they would have properly gauged their reponse in advance.  There was again no reason that a store that serves a city of 8 million potential customers, should have had a mere 4 racks of product. At the Brooklyn store, there were only about 60 people entering the store at 8:00am yet everything was already sold out by 8:10!  This was ridiculous. 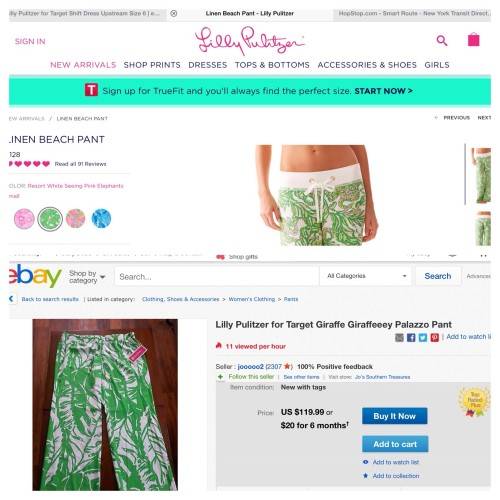 4. Not limiting the amount of items one customer can buy

At my local store, one woman spent over $600 and had a cart full of every item.  You can bet that most of that is currently being solf on eBay for three times the price!  Some idiotic eBay sellers are even charging as much as you would pay for a REAL Lilly Pulitzer frock!  While I support people seeing an opportunity and wanting to make that buck, there should be limits.

5.  Promoting 250 items then only having a handful in each store and at the pop-up.

Why advertise 250 items if the consumer can’t purchase them? At the NYC pop-up there were only about 50 items available.  The stock in my local store was even sorrier with only about 25 clothing items and a handful of houswares.  For example, there were only four sets of coffee cups.  Even worse, the housewares were in a different area than the clothing.  With so little stock, customers had to make a choice between purchasing the houseware products or the apparel. A wiser move would have been to build pop-ups in each store with all 250 items in one area.

6. Not educating the Target staff about the products and their availibility.

The staff were completely clueless about the line and whether they would be receiving more stock.  Consumers were told that they would be able to purchase items later although Target executives announced that they had no more stock and will not be replenishing the stores or online.  Also, properly train the staff to treat each designer collaboration as an exciting in-store celebratory event rather than a normal work day.

7. Pissing the Target consumer off by not manufacturing enough product.

Again, this little stock was an insult to the shopper.  While since I am an editor and through my channels, I got everything I wanted, thousands of customers nationwide, including actress Kristin Davis, felt letdown. This was a major mistake.  Consumers should not have to be “lucky” to purchase desired items from a retailer.

“It’s not going to be restocked,” Thomas said. “It’s never our goal to sell out in a day; our goal in stores [is] from four to six weeks. It’s definitely a limited-time run. We do not restock or replenish. It really is a ‘Get it now before it’s gone’ type sale. Shop early, shop often.”

I am puzzled with this theory from a struggling retailer.  The idea for retail success should be to supply the demand, not create thousands of empty-handed, pissed off customers.  Some folks will never come back.  As the saying goes, “People may forget your name, but they never forget the way you made them feel.”

The one winner in this whole mess is the Lilly Pulitzer brand.  I overheard women, who couldn’t get the Target knockoffs at the Brooklyn store, mention they were just going to go for the real thing.