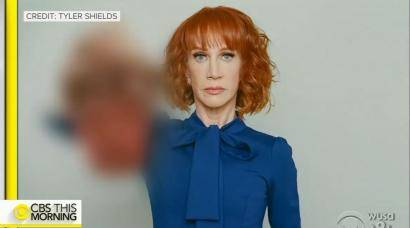 As any reader of TGATP or personal friends and even acquaintances know, I detest the current occupant of the White House with a passion. A lying, uncouth, racist, sexist, crooked loudmouth, wannabe dictator and possible traitor, I consider him the worst thing to happen to this country and the world in my Lifetime. In addition, I have no love for his porn model wife or his animal killing sons. Ivanka I don’t mind as much, although I think her husband is a treasonous traitor. All, of that said, I do not wish these people, however awful, any harm. Do I love horror movies? Sure. But do I condone the portrayal of any kind of gory violence against non-fictional people, absolutely effin’ not!

Photographer Tyler Shield‘s picture of Kathy Griffin’s garnishing the bloody head of Donald J. Trump was so atrocious that I now hold her, in as little esteem, as I hold Donald himself! The picture, resembling a shot from an ISIS beheading is  just sickening and we can’t UN-see it. Why did she ever think this was a good idea? Who did she think would support her? Certainly, not us peacenik lefties!  Surely, she had to have known how wrong this was. No apology can erase the image she permanently burned into all of our heads. In addition, in stooping to this lowest of possible lows, she has given the far right just what they want – an example of a left-leaning person being just as hateful as they are. You have to work really, really hard to actually lose the moral high ground to Trump and his supporters!

Kathy and Tyler, I hope you are happy with the attention you garnered for this stunt. Because now Kathy is finished and has zero fans on either side. And do not insult our intelligence by implying you did not KNOW the shocking picture was going to be received the way it has been. When you stoop to these low levels to garner attention, you join the very “deplorable” people you supposedly disdain. They will be using this against Democrats for years to come.

This ill-conceived stunt puts ALL of us in peril. Because not only did it depict the beheading of an American (abet one who loves Russia more than his own country), it also made it seem as if liberals are violently unhinged, which we are not. Sure, sick jackasses portrayed President Obama in lynchings and other awful depictions. But they are sick jackasses. When you stoop to these low levels to garner attention, you join the very “deplorable” people you supposedly disdain. Right winged zealots will be using this against Democrats for years to come. We are the party of Going Higher and only Love will conquer the hate we are surrounded by.

My advice? You need to fire your publicist and manager and get rid of anyone in your Life that told you this was ok. Because they are secretly hating on you and sabotaged your career to the point you may not be able to come back. I am tolerate of a lot and I accept your apology. But I will never watch you again.

Because I have had enough. There has to be some sense of basic decency on both sides of the political aisle. Next time, can you have these thoughts in your head instead of exposing the rest of the world to you vile attention-seeking nonsense?

Skinny's Satay Will Be Your New Fave NYC Spot

Join Us At The Scooper Bowl World Tour