This Halloween was the usual blast even with the unfortunate cold weather.  It’s the first time in seven years that we were not at 60 degrees or above with temps dipping into the 40s, so it made for a bit of a chilly time in my sexy Dreamgirl Pocahottie Costume!  Had been slated to hit the Tinsley Mortimer hosted affair at Pier 92, but it lived up to its Horror on the Hudson name with crowds of people gated outside of the event and unable to get in!  When I arrived with my friend celebrity stylist Nole Marin, it was like a scene from Dawn of the Dead, with angry costumed partygoers pushing up against gates and fighting with security!  We were the lucky ones as we had tons of other fetes and were on the list. But dozens of  hapless folks had actually paid and this was there one plan for the evening!  This was definitely not the look, so we left and headed for better affairs elsewhere. 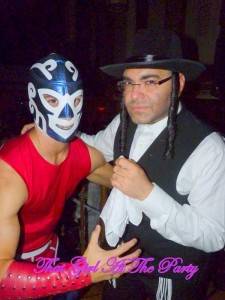 My Pocahottie costume was a definitely hit with the guys!  I was accosted from every angle and with every possible line by all manner of hotties.  One guy was gorgeous in a badass ride but he was yelling from the street.  I mean, who other than hookers, goes over to a guy’s car?  One weird young thug actually demanded I hug him, which was really strange.  Does this ever really work for him?  Are there girls that actually hug up on strange men in the streets?  I wonder what his win/loss ratio is on that lame line. 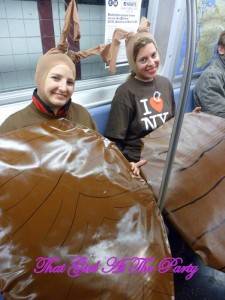 I chose to take the L train home as I knew it would afford some more opportunities for spotting fun costumes.  My favorites were three gals that went as NYC bedbugs, a real cute guy who was a Chilean miner, twins dressed as the ghost twins from “The Shining” and one gal who was a peacock.

Below are some shots from the parties and the NY streets:

Terrie Williams Speaks at the “Woman Thou Art Loosed” Conference