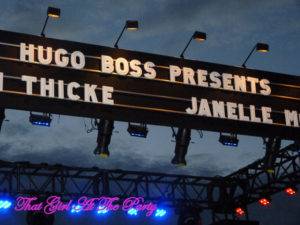 Thursday night, Hugo Boss held one of the best parties of the summer on the rooftop of their Chelsea offices.  Sponsored by DeLeon, guests were treated to mini-concerts by, not one but two, amazing TGATP favorite artists, Robin Thicke and Janelle Monae.  Janelle is so electrifying in concert that I get goossebumps just writing about her!  As I stated in an earlier post, she is like the love-child of James Brown and Grace Jones!  I find her much more visually interesting and vocally talented then the over-hyped Lady Gaga and hope that she becomes the big star that she deserves to be.  In all my years of following acts, except for maybe Prince, I have never seen a more versatile solo act than Ms. Monae!  Fusing rock with funk, and throwing in some R&B and electronica vibes, this gal does it all! 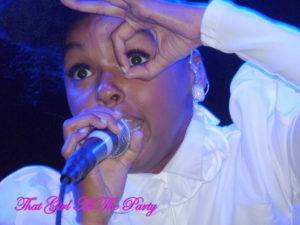 And everybody who follows TGATP knows I love Robin Thicke!  On stage, Robin is a sex machine, who just makes ya go all gushy and offstage, he is the nicest man in the business.  He has been a genuine sweetie every time I have met him and this evening was no different.  He just seems to really be enjoying his success and  seems to be smiling all the time!  His spirit literally glows!  And his bass player is just fine as wine!  I could barely keep my eyes off him.  During the show, my eyes alternated between Robin’s crotch in my face and his bass player, which was a definite feast.  Backstage, despite a confused Hugo Boss PR gal, he still stopped and took shots for TGATP like he always does. 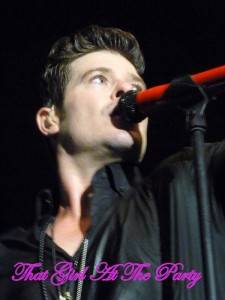 DJ Cassidy, who TGATP has dubbed “the DJ-in-Chief” since he is Obama‘s favorite DJ, was our spinmaster for the evening and as usual, he kept everyone on their feet.

Notable guests in attendance included:  reigning Miss USA Rima Fakim, the winner of Season 8 of America’s Top Model Jaslene Gonzalez, True Beauty alum and Runway Magazine Creative Director Nole Marin, Pras, Patrick Heusinger, Cobra Starshhip, olympic fencer Tim Morehouse, Jason Binn, Emma Snowdon-Jones, and stylist to the stars, Phillip Bloch.  Male model Tyson Beckford was also in the house but was oddly very rude, which was uncharacteristic of my previous encounters with him.  His minions forced me to erase his picture after I took it with their consent.  I was frankly flummoxed by this strange behavior since I have known him for two years and we had numerous e-mail exchanges about one of my TV projects, that he was interested in co-producing.  In addition, far bigger stars have been much nicer people. (Again, why is it always the marginally famous, who put on the airs?) While his boy apologized later, my thing is that you shouldn’t do things that you are gonna feel you need to apologize for after!  Especially not when dealing with TGATP, as it all ends up in the column.

This party was perfect except for the absence of  food!  I am not a big fan of serving copious amounts of alcohol without any hor d’oeuvres, especially for long outdoor events like this, as it leads to over drinking.  By the end of the evening, several guests were slurring their words and one gal almost hurled right in the middle of the party.  Definitely not, a hot look for her!