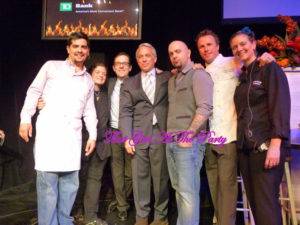 Last night, the GMHC presented SAVOR, an awesome culinary event at Gotham Hall with a menu prepared by seven of New York City’s top chefs!  Hosted by Ted Allen of the Food Network’s “Chopped”, the evening featured a cocktail reception and live auction, followed by dinner, and Passing the Whisk:  The Ultimate Culinary Relay featuring the judges from Chopped!  GMHC Lifetime Achievement Awards were given to Yvette Burton, Global Business Development Executive for IBM and Philanthropist and Theatrical Producer, Ted Snowdon for their outstanding contributions to the organization.

Chris Santos of The Stanton Social, Marc Murphy of Landmarc, and Scott Conant from Scarpetta provided delectable hor d’oeuvres for the cocktail portion of the evening and dinner was a gastronomical dream in four courses!  The first course was a yummy Grilled Octopus with a salad of cucumber, celery, mint, feta cheese, and fingerling potatoes prepared by Amanda Freitag of The Harrison, followed by Cavatappi Pasta with Yellow Tomato Sauce and Lamb Sausage from Alex Guarnaschelli of Butter.  The main entree was melt-in-your-mouth Braised Shortribs with Ancho Chilli Sauce Pozole gingerly prepared by Paladar’s Aaron Sanchez.  Geoffrey Zakarian wowed us with a dessert of Country Chocolate Tart with Bourbon topped with fresh whipped cream!  More than seventeen hours later, I am STILL stuffed!

About the Gay Men’s Health Crisis

Founded by volunteers in 1981, the GMHC is the oldest and largest not-for-profit AIDS organization in the United States. GMHC offers hands-on support services to more than 9,500 men, women and children with AIDS and their families in New York City annually, as well as, education and advocacy for hundreds of thousands nationwide.  It is the world’s first and leading provider of HIV/AIDS prevention, care and advocacy. Building on decades of dedication and expertise, the GMHC fights to end the AIDS epidemic and uplift the lives of all affected.  For more information on this inspiring organization go to:  http://www.gmhc.org/

Liberty of London for Target