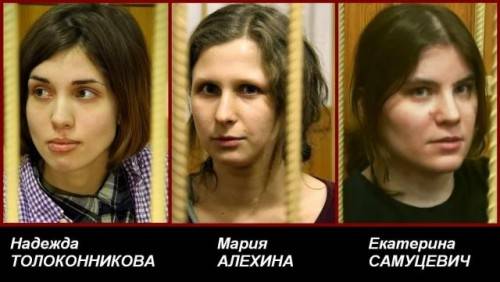 TGATP joins Madonna, Bryan Adams, Elijah Wood, the US Government, the European Union and all other people in civilized societies, who disagree with Vladimir Putin and the Russian Government’s continuing suppression of dissent through coercion and imprisonment.  The recent 2-year sentences handed down to Maria Alyokhina, 24, Nadezhda Tolokonnikova, 22, and Yekaterina Samutsevich, 29, the members of the female punk band, “The Pussy Riot” was an affront to all people of good conscience.  They were imprisoned solely for protesting the Putin government, which is excessive and a threat to free speech everywhere.  Hell, if TGATP was imprisoned for every time I have not agreed with the US, or another government’s policy, I would be doing Life!  If Russia is serious about making democratic strides, freedom of speech, must be the first absolute.  In honor of these three courageous women, here are some famous quotes on the necessity of free speech in a civilized society.

“A state that suppresses all freedom of speech, and which by imposing the most terrible punishments, treats each and every attempt at criticism, however morally justified, and every suggestion for improvement as plotting to high treason, is a state that breaks an unwritten law.”  ~ Kurt Huber

“Freedom of speech is always under attack by Fascist mentality, which exists in all parts of the world, unfortunately.“
~Lawrence Ferlinghetti

“If the freedom of speech is taken away then dumb and silent we may be led, like sheep to the slaughter.”  ~ George Washington

“We should silence anyone who opposes the right to freedom of speech.” ~ Boyle Roche

“We can never be sure that the opinion we are endeavoring to stifle is a false opinion; and if we were sure, stifling it would be an evil still.”~John Stuart Mill, On Liberty, 1859

“The fact is that censorship always defeats its own purpose, for it creates, in the end, the kind of society that is incapable of exercising real discretion.”~Henry Steele Commager“

“Censorship reflects society’s lack of confidence in itself.  It is a hallmark of an authoritarian regime.”  ~Potter Stewart

“I am thankful for all the complaining I hear about our government because it means we have freedom of speech.”
~Nancie J. Carmody

“The peculiar evil of silencing the expression of an opinion is, that it is robbing the human race; posterity as well as the existing generation; those who dissent from the opinion, still more than those who hold it.  If the opinion is right, they are deprived of the opportunity of exchanging error for truth:  if wrong, they lose, what is almost as great a benefit, the clearer perception and livelier impression of truth, produced by its collision with error.” ~John Stuart Mill, On Liberty, 1859

“The test of democracy is freedom of criticism.” ~David Ben-Gurion“

“I disapprove of what you say, but I will defend to the death your right to say it.”
~Evelyn Beatrice Hall paraphrasing Voltaire

“You can cage the singer but not the song.”  ~Harry Belafonte

I am a proud blogger of 10 years, Founder of Canappetit, PR person, Web Entrepreneur, Founder of the Let Love Festival and the Henley Foundation , aunt to 9 and human to Bodhi and Yoko Rey