Dispatches From The Occupation
January 20, 2018
by That Girl At the Party
0

Last year, millions of us took to the streets to protest #FakeCrookedRacistSexistPresidentCrayCray’s infestation of our White House. This year, we return after a year of chaos, racism, sexism and hate from the White House. The march will concentrate on what needs to be our key focus this year – voting in November. We plan to register thousands of voters and fight back against voter suppression.

The Women’s March in 2017 brought more than 4.2 million protesters to the streets in 600 cities worldwide. This year, there are over 250 planned marches around the world. Instead of Washington, this year the main march is in Nevada. While I feel we should have once again held the main march in Washington, which is the seat of power (or should I say – home to the Evil Empire), organizers chose Nevada to host the main event this year because it “was rocked by the deadliest mass shooting in modern U.S. history, recent sexual assault allegations against elected officials and has become a battleground state that will shape the Senate in 2018,” according to the Women’s March website. 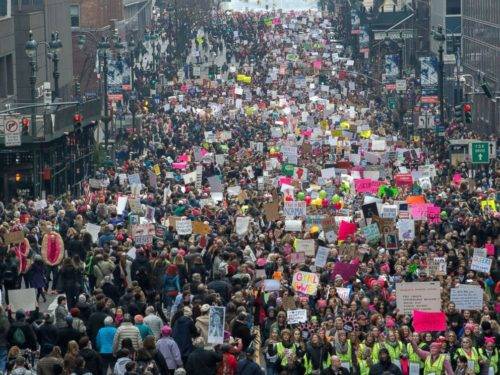 “In 2017, The Women’s March created a powerful movement that has ignited thousands of activists and new leaders,” Tamika Mallory, co-president of Women’s March, said in a statement ahead of Sunday. “In 2018, we must turn our work into action ahead of the midterms. This new initiative will address voter registration and voter suppression head on. We marched for justice in D.C., we created our plan in Detroit and now we’re bringing the power of the polls to Nevada.”

There are dozens of marches but I decided to march in my hometown. Here are details of the NYC march, so you can join me:

New York City’s march, which was attended by 400,000 people last year, will take place Saturday from 11 a.m. to 3 p.m., starting at 72nd Street and Central Park West. The march will start with a rally, then travel past the Trump International Hotel and Tower before turning east at Columbus Circle to continue down Sixth Avenue. The march will end at 43rd Street. The rally will include speakers like Tarana Burke, Founder of #MeToo, Ashley Bennett, who unseated a New Jersey politician who mocked last year’s march; singer Halsey; and MILCK, who drew attention for her Women’s March anthem. Get your ticket here: https://www.eventbrite.com/e/2018-womens-march-on-nyc-tickets-39150171216

It is blessedly going to be a warm springlike day, so dress in layers you can tie around yourself, as it might get hot. Wear comfy shoes and make sure to have a bottle of water. I also enjoyed taking dozens of pics last year, so make sure your phone is fully charged and you have a back up battery.

I am also attending the Women Run after event at the Helen Mills Theater, which will feature speakers, panels and networking. 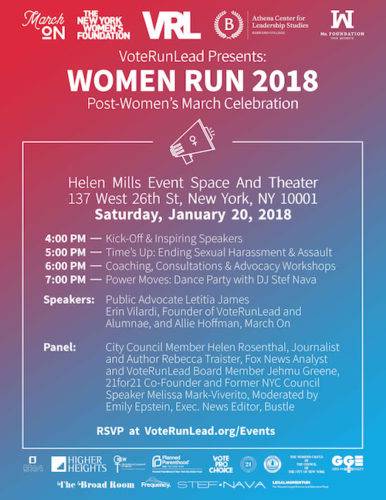