Entertainment, Headline
September 2, 2022
by That Girl At the Party
0

There is no greater crime for a horror thriller than for it to be boring. Supposedly based on a true story Devil In Ohio, which premiered on Netflix today, is four hours too long. It’s like a neverending, demonic-themed Lifetime movie with tons of mundane conversations. 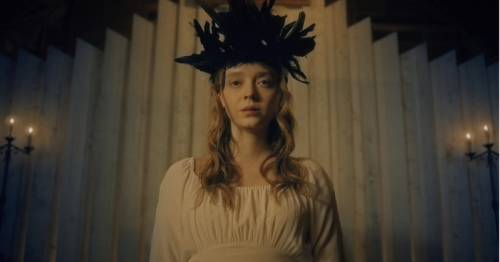 The basic premise is Suzanne, a psychiatrist Mom (played by Bones lead Emily Deschanel), brings home Mae, an unhinged teen escapee from a satanic cult, who turns up at the local hospital with a pentagram carved into her back. This turns out to be a really bad idea as the girl is no ordinary escapee. Originally a 90-day foster kid, Mae manipulates the family and befriends Suzanne’s daughter. In the meantime, her satan loving family and neighbors are looking for her to bring her back.

From the pentagram to birds hitting their window to the demonic prayer Mae makes at their first dinner together to her walking around in trances murmuring to the devil, there are far too many crazy episodes not to get rid of this nut. Suzanne even finds an offering to satan that Mae makes with a picture of her Jules and her best friend! I mean c’mon already! It makes zero sense that this family would not see the signs that they are in grave danger. Everyone acts as if it is normal that this girl is from a satanist family. On the day they kidnap her, Peter asks his other daughter if she is going to go to a dance! And for a horror film, there are way too few scares. Every jump scare is simply a family member popping out from somewhere.

There is an unnecessary subplot that takes up way too much screen time about Peter (Sam Jaeger), the father of the family, trying to sell a house. This has nothing to do with the rest of the story. There is also some psychobabble about how Suzanne feels she needs to save Mae because of her own messed-up childhood. And can someone write an actual gay teen character? Why is every gay teen boy relegated to being the cheerleading, advise-giving, sidekick for his female friends? Jason Sakaki as Issac is wasted in his role. The most interesting character was little Dani, the adopted sister, played by Naomi Tan.

I would’ve enjoyed this far more as a two-hour film than I did having to sacrifice eight hours, six and a half of which I could get back. I ended up fast-forwarding through the last three to get to the point. This cinematic drivel couldn’t tell whether it wanted to be a Lifetime movie, a Shudder horror, a teen coming-of-age film, or a marriage drama. And the ending while an interesting twist, also made no sense. NO ONE would make the bad choice that Suzanne makes! In fact, NO ONE would make the first choice she makes to associate with this daughter of satan.

I Tried Honeylove. Here’s What Happened

No Newer Articles
0
That Girl At the Party September 2, 2022

Judas And The Black Messiah