On Your Screen, TGATP Art and Culture, TGATP Screen
March 8, 2013
by That Girl At the Party
0 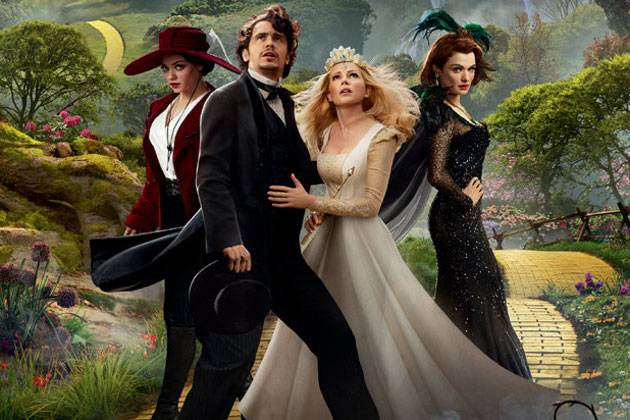 Oz the Great and Powerful is a visually stunning prequel to “Wizard of Oz” that stands on its own as an instant family classic.  Directed by Sam Raimi (most known for his early horror fare, like “Dawn of the Dead”, and the Spiderman trilogy) the film covers the early life of Oscar and how he becomes “The Wizard” that everyone wants to be off to see.  We discover why he became the anonymous man behind the cloud of smoke that Dorothy, the Friendly Lion, the Scarecrow, and the Tin Man rely on decades later.  And what a saga it is!  With adorable and fun new characters, China Girl, Findley and the Tinkers mixed with familiar ones, Glenda the Good Witch, the Wicked Witch of the West and the Munchkins, this new cinematic take on the Oz story will  thrill and delight audiences of all ages.

The film makes great use of its 3-D feature which succeeds in drawing the viewer totally into the merry ole land of Oz.  James Franco is perfectly cast with the right amount of smirk to play Oscar Diggs, the small town magician/ con man who finds his calling in Oz and Mila Kunis is pitch perfect as the jilted woman Theodora, who through circumstances becomes the Wicked Witch.  Michelle Williams is sweet as Glinda, the Good Witch and has never looked lovelier, although the wig was a tad bit too wiggy.  And Rachel Weisz turns in a deliciously wicked performance as Evanora, Theodora’s evil sister, who is instrumental in her spiritual demise.  I fell in love with the new characters Findley, a snarky but sweet flying monkey voiced by Zach Braff and the absolutely adorable China Girl brought to life by Joey King.  My only change to the story would be a happier plot line for China Girl, which I found too unnecessarily sad.  As in all his films, Raimi created cameos for his actor brother Ted Raimi, who appears as the skeptic in the audience at the beginning of the film and his actor friend Bruce Campbell.

A note to parents:  Oz is PG-13 for good reason as there are some really nightmare inducing elements to the story itself and visually that will disturb younger children.  So I wouldn’t take any children under 10 or 11.

Over 40 Females Holds A Fabulous Fete At Christopher Fischer

Stunning Oz the Great and Powerful Line from HSN!

The Cast Of “Beauty And The Beast” Dazzled In Shanghai

Bears Is A Heartwarming Must-See