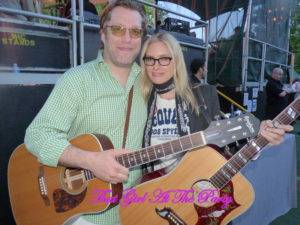 On Tuesday night, Central Park Summerstage celebrated 25 years of great music programming with an annual gala produced by Michael Dorf & the City Winery. The evening featured a cocktail party followed by dinner al fresco and a concert with a star-studded roster performing the music of Simon & Garfunkel.  Padma Lakshmi and Mayor Bloomberg opened the concert with warm words about the legacy of Summerstage and we were blessed with a rare appearance by Art Garfunkel.  Although there were titters from the crowd that Paul Simon was expected for a surprise finale, he was, ultimately, a no-show.

I was particularly happy to meet Edward Menicheschi, the Publisher of my favorite magazine Vanity Fair, at the reception!  We had a wonderful chat about the deeply moving love letters that Richard Burton wrote to Elizabeth Taylor that are featured in this month’s, must-read issue.  The beautiful heartfelt lyricism of Burton’s words will literally bring tears to your eyes and restored my Faith that true Love is possible!  The article also reinforced my newfound belief in the evils of alcohol as it was truly only Burton’s alcoholism that broke him and his beloved Elizabeth apart.

TGATP’s Take On for 11/2/11: Kim Kardashian’s Sham Marriage and Other Annoying Folks