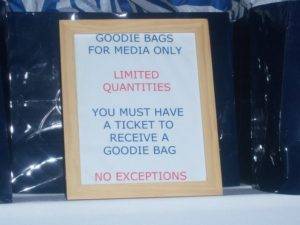 When you attend over 800 parties and events a year, you are bound to be vastly disappointed or run into some idiotic people and/or situations at a few of them.  This was the case with the usually wonderful Jane Iredale sponsored Spa Media Party!  Formerly my favorite bi-annual beauty event of the year, what occurred this time was nothing short of a hot PR mess!  Fortunately, the evening was saved by two far better downtown soirees.

The Spa Media Party and subsequent Spa Week, is usually the beauty event of the year and tons of fun with a gift bag that is filled to the brim with products for the media to sample and more importantly, review.  But this year, due to some confusion on the part of the organizers, a good event turned bad when many actual media folks were refused the gift bag!  Despite the fact that I am media and that there was a big sign that said that the bags were “for media only“, over 12 known party crashers, who in no way cover the event or products, were given the bag loaded with products!  I was one of the media people who favorably covered their last event.  (In fact, if  you goggled “spa media party”, my review was, at the time of this post,  the only one that came up.) But, inexplicably, I still wasn’t allowed a bag even when I produced my ticket!   So now, I am forced to contact each individual sponsor in order to review any of the featured products.  In other words, you were better off as a party crasher than as a legitimate outlet which is the ultimate PR/Marketing faux pas!  What is the point of courting sponsors and throwing a “media party” if the actual media can’t get the products?   I could care less if an event planner wants to gift some party crashers with goods.  But a smart one makes sure those of us that do the work to truly support the events and products are taken care of, as well!  Should I perhaps hire some party crashers to write since they all got the bags??  I really hate these type of bad party PR situations as they just create a really bad vibe, sully the brand, and kill good party chi!  So hopefully, for the sake of both the media and their sponsors, the staff at Spa Media will work this out by their next go ‘round.

After kicking myself a few times over not being a smarter cookie, I raced off to two more affable shindigs downtown.  First stop was the Calvin Klein party at ABC Carpet and Home, which was a wonderful time, instantly lifted my bad party mood, and spotlighted some really beautiful must-have pieces.  Celebrating the new Calvin Klein furniture line designed in collaboration with the lovely Michael Kilpatrick, the party featured yummy bites from Great Performances.  The crowd was of the sophisticated, intellectual sort and Michael and his gorgeous wife, Celeste were fun to chat with.  Celeste was sporting two unique pieces of jewelry that I just adored.  Met two ABC workers one of whom made me howl with, much needed laughter, when he quipped that one very tightly panted, hottie waiter “had a quarter in his pocket from 1925.”

From ABC trekked off to the Ricky’s 20th Anniversary Party, which was in full force at the Hotel Rivington. This party was a riotous Pre-Halloween party with folks dressed up and positioned around the room.  My table had a dude done up as Chewbacca who was so still that I thought he was a mannequin.  It was well weird to be so totally stone cold as everyone around me was two fisting it as I recounted my evening to them.  The Ricky’s gift bag, though far smaller, made up for the Spa Week bag fiasco with some really amazing products from Murad, Warren Tricomi, Bodyography, Temptu, Zen Cosmetics, Sally Hershberger, Matisse Elite, and Ugly Doll.

All-in-all it was a mixed bag of an evening (pun intended!) with many valuable Party Life lessons learned!