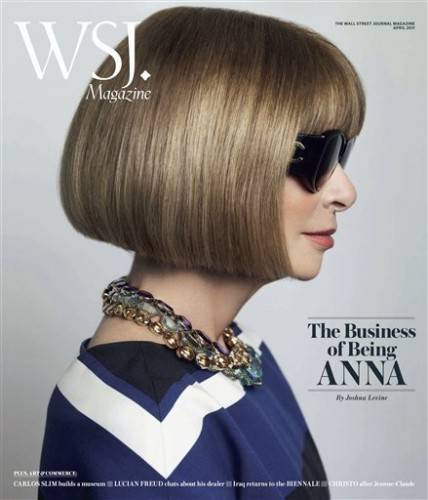 In her signature designer shades and classic bob, Anna Wintour makes a rare appearance as a cover girl in the April issue of WSJ Magazine hitting newsstands this Saturday, March 26.  While you may have heard the buzz by now, TGATP wanted to let you know that WSJMagazine.com has released the feature online today.  The exceedingly private publishing powerhouse marks her debut on a posed cover and even opens up her suite at the Paris Ritz Hotel for famed photographer Mario Testino along with her rolodex for writer Joshua Levine.

Brand Anna cracks the hard, Devil Wears Prada shell of the Wintour persona to reveal a loyal friend and patron, astute businesswoman and even a sense of humor (she wore Prada to that film’s premiere). Friends and business associates are tapped for their perspective of the fashion icon, including Justin Timberlake, Baz Luhrmann, Calvin Klein, Marc Jacobs, Michael Bloomberg, S.I. Newhouse, among others, demonstrating just how connected she really is.  Coincidentally, the feature is a business story on the “global brand” that Anna has become with help of her fully connected network reaching far and wide outside of just the fashion world she’s most identified with.

From spearheading Fashion Night Out to turning around the fate of the movie Moulin Rouge, according to the Director Baz Luhrmann himself, “Anna’s army gives her a reach that far exceeds her grasp as a magazine editor, not to mention, a deceptively potent economic punch,” says Levine.