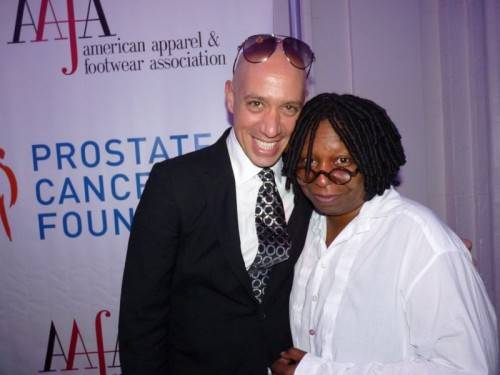 Last night, TGATP was thrilled to be invited to cover and attend the 33rd Annual AAFA American Image  Awards. The event was emceed by Robert Verdi and also attended by the always wonderful, Whoopi Goldberg, who Verdi hilariously refered to as “the blackest Jew he has ever known.” Held in the Ballroom of the Grand Hyatt,  the awards brought out the best and the brightest in Apparel and Footwear.

Whoopi was on hand to present the marh-va-lous Isabel and Reuben Toledo, (who TGATP completely adores) with the AAFA Fashion Maverick Award!  This eclectic couple are always a sheer delight to see at any event.  This year’s other AAFA award winners were:  Man of the Year, Mark Weber of DKNY International, William Rast for Brand of the Year, UGG Australia for Footwear Brand of the Year, and David Koch as Humanitarian of the Year for his work with the Prostate Cancer Foundation, which was also the charity for the evening.  Donna Karan attended the fete to celebrate her company CEO, Mark Weber.

It was a pleasure to catch up with the Toledos and Robert Verdi.   I chided Robert a bit about his bitchy mean girl event staff, who always give everyone an undue hard time at his Fashion Week Lounge.  It is a case of the inmates taking over the asylum.  Got to chat with Whoopi a bit as well.  Wanted to get on sista girl about the smoking thing again.  But decided to avoid that topic since I broached her with it last time.  I, instead, congratulated her on her very courageous and truthful statements about affirmative action on “The View.” It was a Truth that was well past stating.  TGATP had lovely dinner companionship in Beau and Joyce Gibbons.  Married for 46 years, this couple was adorable and Beau was the perfect husband.  He was attentive to his wife all evening, lets her pick whatever hotel she wants when they travel, and even spoke of picking up her shopping bills!  I kept asking could we clone him!  Not finding a Man, like Beau, is why I am not married today!

Via Spiga for Spring/Summer 2011