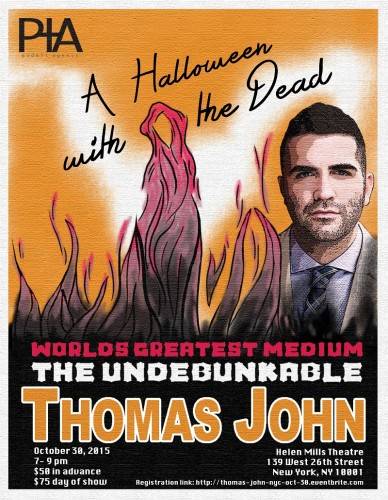 Join us tonight for a Halloween Eve event, as we connect to spirits on the other side with the amazing Thomas John, The World’s Greatest Medium, perhaps of all time! Thomas is astonishing people all across the globe as he delivers otherworldly messages from the dead. Communicate with your loved ones who have passed. Be shocked and awed during this unforgettable evening.

Thomas John is one of the nation’s most coveted psychic mediums. Bi-Coastally based, his gifts continue to be in high demand with influencers, A-list celebrities, and those at crossroads in life from coast to coast and around the globe. He has been prominently featured in top tier print media, including New York Magazine, The Wall Street Journal, The New York Post, GQ, Maxim, OK! Magazine, The Hollywood Reporter, and Life and Style Weekly, along with broadcast appearances on Dr. Phil, Bravo’s Million Dollar Listing New York and The Real Housewives of New York City, and Entertainment Tonight.

Thomas was born and raised in the suburbs of Boston and now resides bi-coastally in both New York City and Los Angeles, CA. A reality show based on his life and ‘business from beyond’ is currently in development at a major cable network, to be released in 2015. His first novel, Never Argue with a Dead Person: True and Unbelievable Stories from the Other Side (Hampton Roads) is available at Amazon.com.

Candy Corn Nails For Halloween And Beyond!