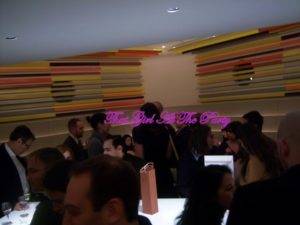 Today, in celebration of the 50th Anniversary of the Frank Lloyd Wright designed Guggenheim Museum, NY’s newest restaurant The Wright (1071 Fifth Avenue @ 88th) is opening.  I was invited to a sampling party on Tuesday and what a marvelous fete it was!  Located in the museum with seating for just 58 people, the restaurant was designed by architect Andre Kikoski with art by British born artist, Liam Gillick.  There is also a communal table where guests can enjoy a full-service menu. The décor is cool, with a chic cosmopolitan ‘60’s feel, that made me think of old Rock Hudson/Doris Day films or a set from Mad Men.  I would just love to meet Don Draper for a martini there! 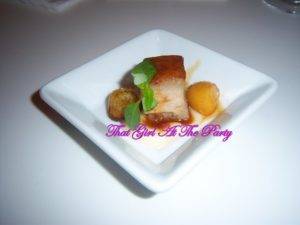 The menu at the Wright showcases the extraordinary culinary talents of its Executive Chef, Rodolfo Contreras.  Contreras has worked with some of the top chefs in the world including Chef Rick Moonen of Oceana and Chef Christian Delouvrier of Lespinasse.  Most recently he was part of a small, exclusive inner circle of chefs who worked closely with David Bouley.  I adore him, as his food is absolutely DIVINE!  On opening night, we were served hor d’ouerves so delectable that they literally melted in our mouths!  My favorites were the pork belly with caramelized local apple (quite possibly the best hor d’ouerve I have ever had!), winter squash risotto, braised short rib with heirloom carrot, and parsnip soup with lovely lil’ parsnip chips!  You simply have never eaten until you have experienced Rodolfo’s food!  And how fabulous that he boxes in his spare time.  Just an all around great guy!

We all had a complete blast and even though I had a ton of events that night I stayed at this one.  My heart palpitated over a long, tall drink of water named Asher Ross, who admitted to being a voracious reader!  How hot is that!  Really nothing sexier in a man than a brain!  (Well, maybe long hair and a guitar!) Alas, all the good ones DO apparently seem to be taken, as he was off to watch his gal play soccer.

The Wright is currently open from Friday through Wednesday for lunch and cocktails and will be open for dinner in January 2010.  The European-style bar featuring small plates, paninis, cocktails, and espresso is a new favorite TGATP hang in NY.

It's Complicated Private Screening and Reception

Target Wedding Says Be Yourself Together