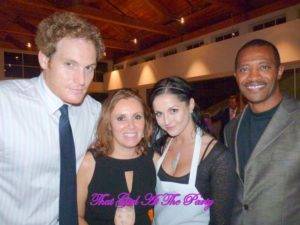 Despite being held in (gasp!) Jersey, this year’s Rising Star’s Revue was just as fabulous as last year’s!  In fact, it was in many ways nicer, as there were not hordes of people clamoring for each dish.  The menu was awesome!  While Emma Hearst’s delectable Pate di Fegato won the competition, my favorite dishes were Marc Forgione‘s Scallop dish, Pineapple Cremeux from Ron Paprocki and the Milk and Chocolate Tastes and Textures from Angela Pinkerton.  Hell, everything was so yummy that it was virtually impossible to pick just ONE favorite!  I would’ve called this year an all around tie!

Drinks were provided by mixologists Brad Farran of the Clover Club, who made a lovely white rum concoction called “The Strawberry Blonde” and hottie and goofball Jason Litrell of Dram.  Jason has a crazy backstory!  His first bartending gig was as a replacement for a bartender, who had been stabbed by a patron, at a dive called “Shooters Cocktails” where “the shooters were the customers and there were no cocktails to be found”!  The Sommelier for the evening was Pascaline Lepeltier of Rouge Tomato and the hosting chef was Chris Siversen of the Maritime Parc.

We were lucky that the Water Taxi back did not tip over with all of the extra weight that the guests were carrying on the way back to the NY shores!  Having no space left at all in my own belly, I was amazed at the folks who were able to consume the beautiful spread laid out by the chefs at Nuela for the afterparty!

What is a Rising Star?

The Rising Stars are chosen annually by the StarChefs.com Advisory Board, which is made up of more than 20 of the country’s top chefs.  Final decisions are based on in-person interviews and tastings with the nominees.  The up-and-coming Rising Star Chefs represent the vanguard of America’s contemporary dining scene and are featured on StarChefs.com.  Ultimately, creativity, ambition, exquisite presentation, and most importantly, delicious food, gains a participating chef the StarChefs Rising Stars Award.

StarChefs™ is an award-winning online magazine, serving the foodservice industry and food aficionados since 1995. The site receives 20 million hits/ 10 million page views/ 500,000 unique visitors/month and has won Best of the Web awards from, among others, U.S. News Online, USA Today, Brill’s Content, and Lycos.

What was originally intended as a home on the web for super-star celebrity chefs like Bobby Flay, Jean-Georges Vongerichten, and Todd English has grown over the last decade to become THE foodservice industry insider site – with a clear focus on working chefs.  StarChefs.com is about identifying and featuring the best chefs in the industry – not because they are on TV, but because they are talented, innovative, passionate, and driven individuals, who contribute greatly to our culinary community.  StarChefs’ mission is to serve as a catalyst for culinary professionals to succeed at the highest possible standard, and to give them the tools that they need to meet and overcome the many challenges they face.