On Your Screen, TGATP Art and Culture
October 4, 2010
by That Girl At the Party
0 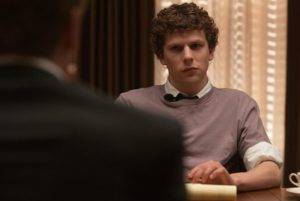 Based on the book The Accidental Billionaires: The Founding of Facebook, A Tale of Sex, Money, Genius, and Betrayal by Ben Mezerich, The Social Network recounts how Facebook was invented and the ensuing betrayals and power plays that occurred when it began to grow.  It is a cautionary tale for all of us as it demonstrates that when it comes to business, particularly a lucrative one, for many people, the words “friendship.” and “loyalty” do not exist. (I happen to believe in sharing the wealth in any venture but have been burned in the past by people who have been far less ethical!)

Dorothy Parker once said “If you want to know what God thinks of money, just look at the people he gave it to.” The Social Network paints such a nasty picture of Facebook founder, Mark Zuckerberg that utilizing Parker’s postulate one would think that God positively detests money!  From the opening scene, Zuckerberg is portrayed as such a complete jerk that I came away from the first scene with a dislike for him that only slightly abated when the credits rolled.  As played by Jesse Eisenberg, he is vain, arrogant, disloyal, selfish, narcissistic, and completely socially inept.  (There were points when he came off so odious that I wanted to flee the theater and rush home and take down my Facebook pages.) If the events were not based on true events, the film would seem somewhat anti-Semitic as Zuckerberg is visualized as a modern-day Shylock, so greedy that he even cheats his one and only good friend.

As to not spoil the story, I will leave the rest of the plot points out.  However, I will say that Aaron Sorkin is, so far this year, the one to beat for Best Screenplay come Oscar time.  His amazing script, which ingeniously tells the story through the use of the duo court cases that Zuckerberg was hit with, is completely mesmerizing.  And David Fincher’s direction is spot-on moving back and forth between the depositions and the flashback without confusing the audience.  All of the acting is ace with Eisenberg as Zuckerberg, Andrew Garfield as his best friend and swindle victim, Eduardo Saverin, and Justin Timberlake as Napster creator and Zuckerberg’s somewhat twisted Svengali, Sean Parker, all turning in great performances.  Armie Hammer pulls off an amazing feat and plays both Cameron AND Tyler Winklevoss so seamlessly, that I thought twins were cast in the role.  Brenda Song was also unforgettable as Eduardo’s psycho girlfriend.

While the Social Network is a must-see film, in some ways it was bittersweet for me to see the treachery behind its inception, especially since I am a Facebook addict.  Rather than a “warts and all” Zuckerberg bio-pic, this one was ALL warts!  Although some sites and Zuckerberg hmself have shrugged the film off as inaccurate fiction, Cameron Winklevoss, one of Zuckerberg’s alleged victims states, “I feel it tells a true story of two betrayals: one being myself, Cameron and Divya, and the other, of course, between Mark and his best friend.  It does lay out three perspectives of what happened. It reflects very well the public record, the ample amount of public record, the documents, the legal proceedings.  It is a nonfiction film.”

I am frankly shocked (and somewhat frightened!) by my fellow critics’ view of this portrayal of Zuckerberg’s character as, in any way, likable.  In addition, in today’s NY TImes there is an article that states that there is a generation gap in moviegoers feelings about Zuckerberg after viewing the film.  “When you talk to people afterward, it was as if they were seeing two different films,” said Scott Rudin, one of the producers. “The older audiences see Zuckerberg as a tragic figure who comes out of the film with less of himself than when he went in, while young people see him as completely enhanced, a rock star, who did what he needed to do to protect the thing that he had created.” If the children of Madoff-types, the Ritalin generation plan to continue to do business in this cowboy way without any kind of ethics and take no-prisoners attitudes, it bodes very badly for our global business future!

Zuckerberg’s transparently timed Oprah appearance and donation of $100 million to the Newark school system, at the same time as the movie’s release, was definitely a great PR move on his part.  But perhaps, the greatest irony is that a socially inept boy, who seemingly did not know the meaning of true friendship, would create a phenomena whereby 500 million people “friend” each other daily.